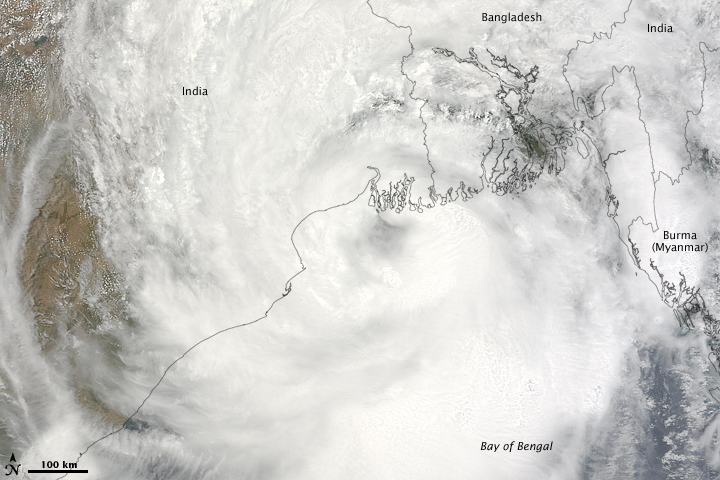 Tropical Storm Aila struck southern Bangladesh and eastern India on May 27, 2009. The New York Times reported that floods and mudslides killed at least 191 people and left hundreds of thousands more homeless. As of May 27, the death toll was expected to rise.

According to the Associated Press, some 2.3 million people were affected by Aila, many of them stranded in flooded villages. Storm surges in Bangladesh flooded agricultural areas with salty water. Home to roughly 25,000 residents, the coastal island Nijhum Dwip was reported to be completely submerged. As of May 27, 2009, many rural villages had not yet been reached by relief workers, and the death toll was expected to rise significantly as search and rescue efforts continued.

Aila almost completely fills this true-color image from May 25, 2009. The storm stretches from the Bay of Bengal deep into India, Bangladesh, and Burma (Myanmar).

Cyclone Gael lingered off the east coast of Madagascar on February 7, 2009.

The center of Tropical Storm Jade is nearly over the eastern Madagascar shore in this photo-like image from April 6, 2009.