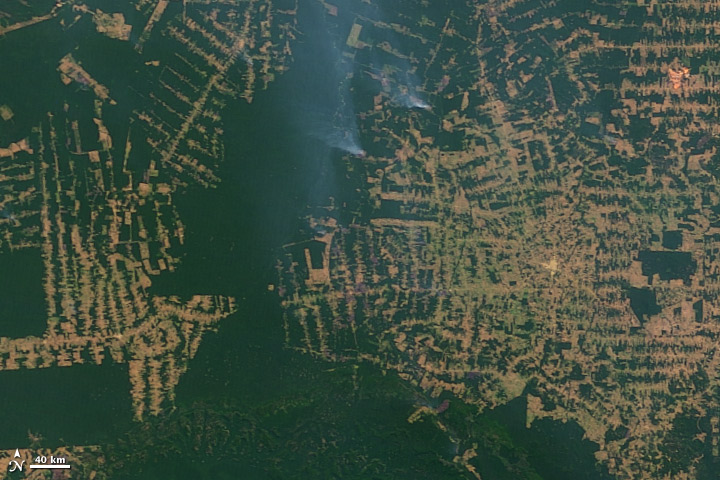 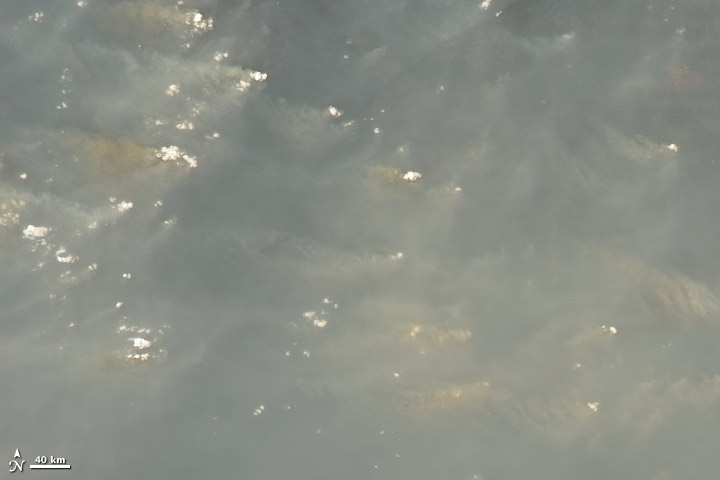 The state of Rondônia in western Brazil is one of the most deforested parts of the Amazon. By the beginning of this decade, the frontier had reached the remote northwest corner of Rondônia, pictured in this pair of images from the Moderate Resolution Imaging Spectroradiometer (MODIS) on NASA’s Terra satellite from 2007.

In the image from August 12, 2007, intact forest is deep green, while cleared areas are tan (bare ground) or light green (crops, pasture, or occasionally, second-growth forest). This image is one of ten images in the Earth Observatory’s World of Change: Amazon Deforestation article.

The fishbone pattern of small clearings along new roads is the beginning of one of the common deforestation trajectories in the Amazon. New roads (legal and illegal) attract small farmers, who clear some land for crops. When the soil gives out, they convert the old croplands to pasture and clear new forest. When yields fall again and not enough forest remains to clear, they sell or abandon their small holdings to larger-scale ranchers, who consolidate the small farms into large pastures.

The image from September 30, 2007, shows one consequence of forest clearing in the Amazon: thick smoke that hangs over the forest at different times throughout the dry season. Fire is the primary tool for clearing land in the Amazon, and it doesn’t always stay where land owners intend it to. It frequently escapes control and invades adjacent forest and pasture. In 2007, the biomass burning season in the Amazon was the most intense of this decade. This smoky sight was common throughout August and September.

NASA images by Jesse Allen and Robert Simmon, based on data from the MODIS science team. Caption by Rebecca Lindsey.