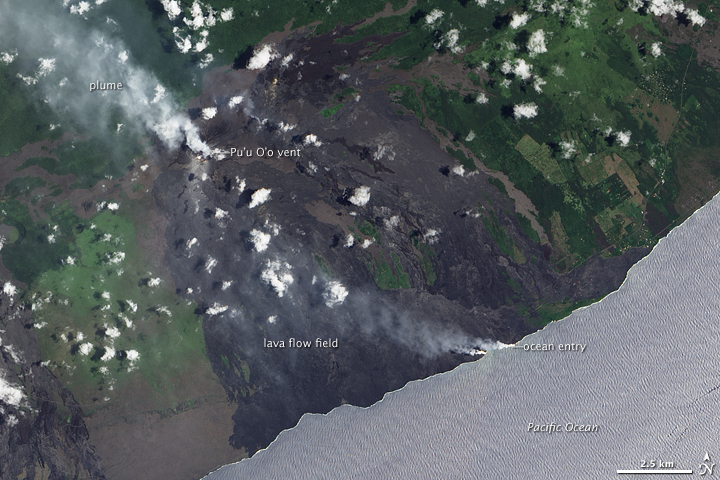 Plumes continued to rise from Kilauea Volcano on Hawaii’s big island in late May 2009. The Advanced Land Imager (ALI) on NASA’s Earth Observing-1 satellite captured this true-color image on May 24, 2009.

Small clouds float overhead, casting their shadows on the land surface below. The relatively light cloud cover allows a clear view of the plume that rises from the Pu‘u ‘O‘o Crater and blows toward the northwest. Along the island’s coast, dual small plumes blow in the same direction. These plumes arise from searing lava reaching the ocean water.

A close look at this image reveals a landscape scarred by repeated lava flows. Deep brown and charcoal-colored rock rivers flow to the sea from Kilauea vents. In a bulletin issued on May 25, 2009, the Hawaiian Volcano Observatory warned of the hazards presented by Kilauea’s lava delta, including the possibility of rock collapses and rock falls that can occur with little or no warning. In addition, the steam plumes that arise from lava entering the ocean contain fine lava fragments and acid droplets.

Between the lava flows, brushes of deep green vegetation appear along Hawaii’s southern coast. The ocean water appears pale blue-gray, with a rippled surface. This light ocean color is likely sunglint—the mirror-like reflection of sunlight off the ocean surface.

Ranking among Hawaii’s most active volcanoes, Kilauea is a shield volcano with a low, broad shape resembling an ancient warrior shield. Kilauea overlaps its neighbor, Mauna Loa, another shield volcano to the west.