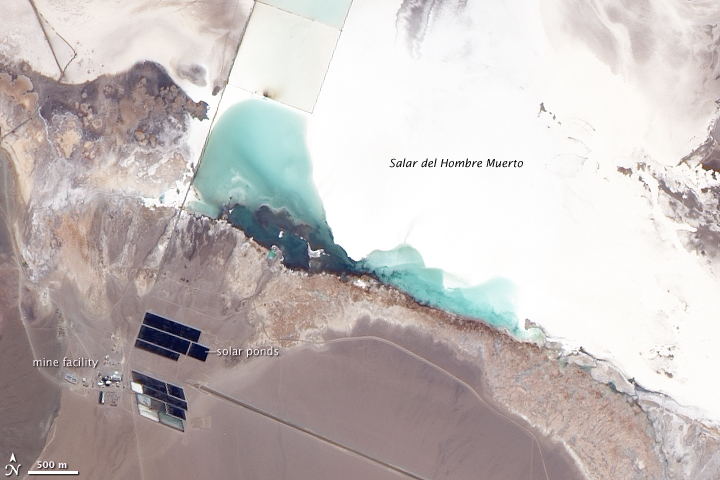 Brown and white dominate this true-color image of the Salar del Hombre Muerto, in northwestern Argentina. A salar is a salt pan, created when water repeatedly evaporates from a shallow lake, leaving behind a crusty layer of salt minerals, which are brilliant white in this image.

Unlike many salt pans in the region in and near the world’s driest desert, the Atacama Desert, Salar del Hombre Muerto receives enough rainfall to occasionally be covered by a thin layer of water. The water evaporates or percolates through the salt crust to form a layer of brine. The brine in Salar del Hombre Muerto is rich in lithium, an element used in a wide range of products from batteries to medication. The mine in the lower left corner of the image is extracting lithium from the brine by pumping it into solar ponds. The dry, sunny, windy environment quickly evaporates the water from the brine, leaving behind a more concentrated solution of lithium.

Lithium is not the only element mined near the Salar del Hombre Muerto. West of the lithium mine shown here is an Incan gold mine, the Incahuasi, which recommenced production in January 2008.

The Advanced Land Image on NASA’s EO-1 satellite captured this image on May 16, 2009.

Brilliant white in this true-color image, Argentina's Salar del Hombre Muerto is a high-altitude salt pan rich in minerals such as lithium.