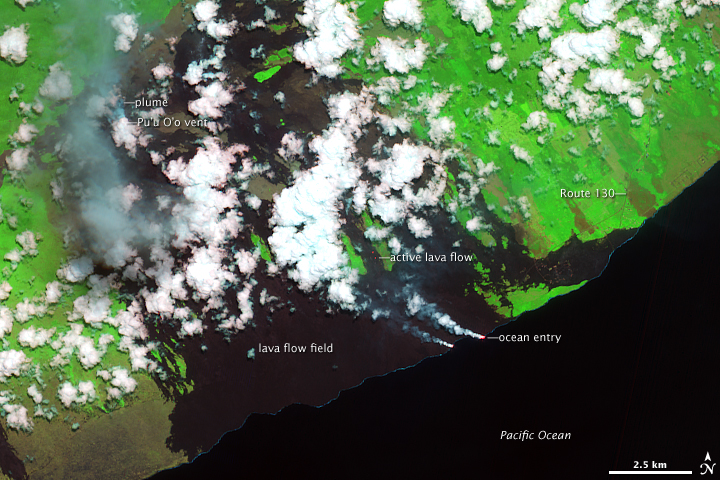 Several days after the crew of the Space Shuttle Atlantis photographed volcanic activity from Hawaii’s Kilauea Volcano, the Advanced Land Imager (ALI) on NASA’s Earth Observing-1 satellite captured this image, on May 21, 2009.

ALI used a combination of shortwave infrared, infrared, and red light to make this image. Vegetation appears fluorescent green. Lava appears deep brown. High-temperature areas appear red, such as the pinpoints of light along the active lava flow and the coast. Clouds appear white with a hint of blue, and volcanic plumes appear sky blue. Through the patchwork of clouds floating overhead, evidence of the volcano’s activity appears in the form of a plume from Pu‘u ‘O‘o Crater. Both old and new lava flows have formed rocky rivulets reaching all the way to the coast, and where fresh lava enters the water, plumes rise.

The same day that ALI acquired this image, the Hawaiian Volcano Observatory reported that magma was releasing gas through Pu‘u ‘O‘o Crater then erupting from vents to the east. The observatory maintained a volcano watch for Kilauea and reported elevated sulfur dioxide levels in the area.

Kilauea is a shield volcano with a low, broad shape resembling an ancient warrior shield. The volcano is one of Hawaii’s most active. Written records of volcanic activity extend back to the 1820s, and accounts of eruptions from Kilauea occur in Polynesian legends. Kilauea overlaps its neighbor, Mauna Loa, another shield volcano to the west.