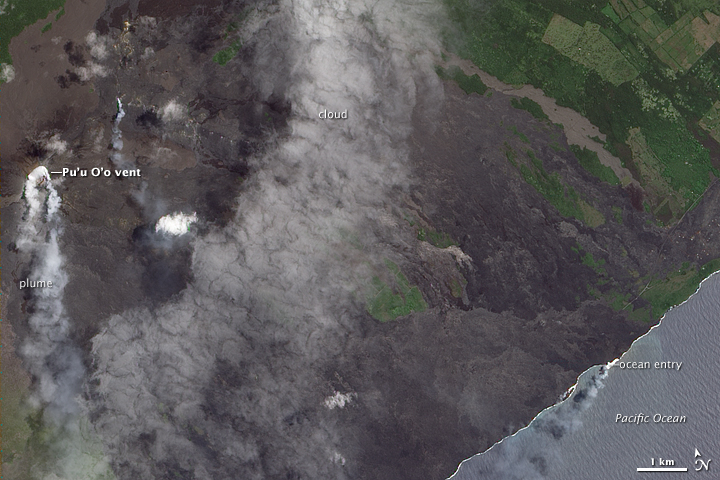 The Pu‘u ‘O‘o Crater releases a plume that blows southward, along the left edge of this image. Southeast of the crater, along the coastline, another plume appears. Although smaller than the plume from Pu‘u ‘O‘o Crater, this plume is similar in appearance and also results from volcanic activity, where hot lava from Kilauea meets the ocean and sends up steam. The wide band of vapor curving through the middle of the image is a bank of clouds.

According to the Hawaii Volcano Observatory, the day ALI acquired this image magma from Kilauea released gas through the Pu‘u ‘O‘o Crater before it erupted through vents to the east. The volcano continued to release elevated amounts of sulfur dioxide, but the amounts released varied throughout the day.

Kilauea is a shield volcano with a low, broad shape that resembles an ancient warrior shield. The volcano overlaps its neighbor, Mauna Loa, another shield volcano to the west. Kilauea is one of Hawaii’s most active volcanoes.