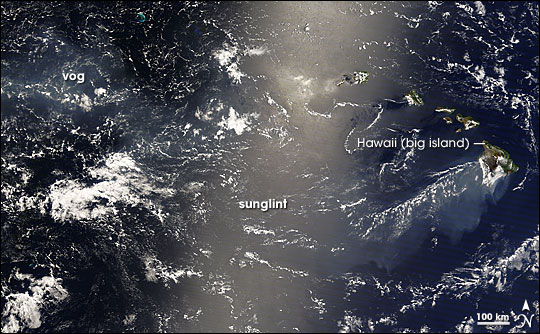 Kilauea Volcano lies in the southeastern part of Hawaii’s big island, near the coast. This image shows a blue-white plume of vog blowing westward over the Pacific Ocean from Kilauea. Vog (volcanic smog), results from a mix of volcanic pollutants, such as sulfur dioxide, and oxygen, water vapor, and sunlight. According to the U.S. Geological Survey’s Kilauea Status Reports, both the Halema’uma’u vent and the Pu’u O’o crater at Kilauea released elevated amounts of sulfur dioxide July 7-8, 2008. The contribution of sunlight to the vog’s formation is evident in the pale streak running diagonally through the image. This is sunglint resulting from sunlight reflecting off the ocean’s surface and into the satellite sensor. Continuing its journey away from the volcano, discernible vog appears east of the wide band of sunglint.

Kilauea has been Hawaii’s most active volcano during recorded history. It is a shield volcano, meaning it resembles an ancient warrior shield with its low, broad shape. The volcano overlaps the eastern flank of the Mauna Loa Volcano. In 1983, a long-term eruption began at Kilauea, producing lava flows, adding to the coastline, and destroying homes.

As summer progressed, the summit crater in Kilauea Volcano on Hawaii's big island continued a pattern of intermittent activity that began in early 2008. On August 7, a plume of ash and gas streamed away from the island.