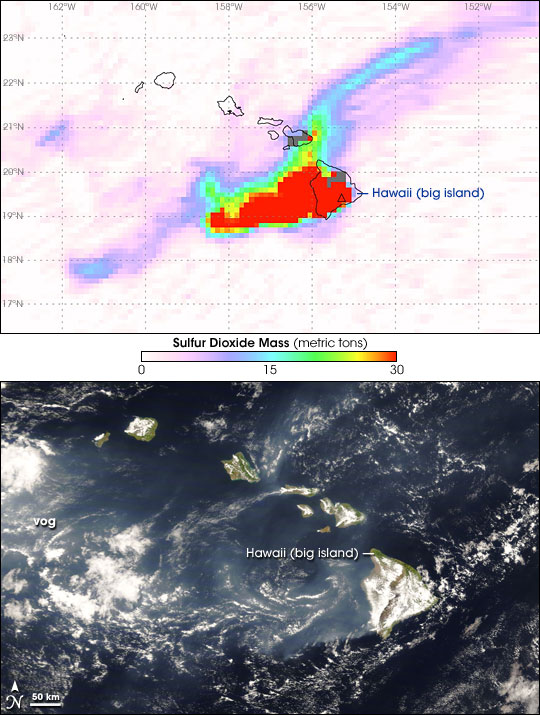 In late April 2008, Kilauea Volcano Volcano on Hawaii’s big island continued its pattern of increased activity, including elevated seismic tremors and emissions from the volcano’s Halema‘uma‘u vent. Two NASA satellite sensors observed different aspects of the volcano’s activity on April 26, 2008. As Kilauea emitted ash and steam, the sensors recorded both the visible volcanic emissions, and the concentrations of one volcanic pollutant not visible to human eyes.

Sulfur dioxide is a common volcanic pollutant, and it can pose health hazards, especially for people with preexisting breathing difficulties. The top image, acquired by the Ozone Monitoring Instrument (OMI) on NASA’s Aura satellite, shows metric tons of sulfur dioxide measured in the lowest 5 kilometers (roughly 3 miles) of the atmosphere around Hawaii. Lowest amounts appear in lavender, and highest amounts appear in red.

The greatest concentration appears over Hawaii’s big island and immediately west-southwest, but lower concentrations spread both toward the southwest and the northeast. Sulfur dioxide mass is scaled from 0 to 30 metric tons in this image, although some of the highest concentrations were actually greater than the top end of scale used for this image. Two days after this image was acquired, the Hawaiian Volcano Observatory continued to warn residents nearby of elevated sulfur dioxide levels, and they indicated that closure of Hawaii Volcanoes National Park might be necessary.

When sulfur dioxide and other volcanic pollutants mix with oxygen and water vapor in the presence of sunlight, the result is a volcanic smog known as vog. The bottom image, acquired by the Moderate Resolution Imaging Spectroradiometer (MODIS) on NASA’s Terra satellite, shows the vog, which is visible to human eyes. The vog in this image appears as a pale blue-gray haze, thinner and with more diffuse outlines than the nearby white clouds. The same day MODIS acquired this image, the U.S. Air Force Weather Agency (AFWA) issued a bulletin describing vog extending roughly 280 kilometers (150 nautical miles) from the island.

Hawaii’s most active volcano during recorded history, Kilauea is a shield volcano, meaning it resembles an ancient warrior shield with its low, broad shape. The volcano overlaps the eastern flank of the Mauna Loa Volcano. In 1983, a long-term eruption began at Kilauea, producing lava flows, adding to the coastline, and destroying homes.