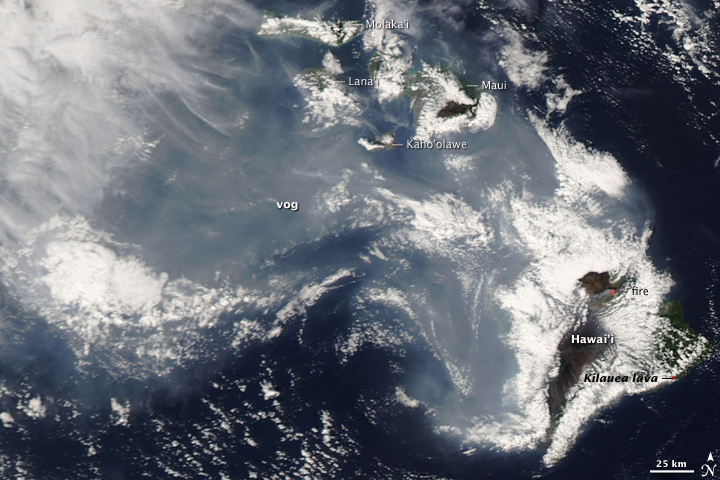 Dense, gray-white haze hung low over the Hawaiian Islands on December 3, 2008, when the Moderate Resolution Imaging Spectroradiometer (MODIS) on NASA’s Aqua satellite captured this image. Though seldom so thick or widespread, the haze is common in Hawai'i. It forms when sulfur dioxide from the islands’ volcanoes mixes with oxygen and water in the atmosphere. The tiny sulfate particles that make up vog reflect light well so that vog shows up easily when viewed from space. On December 3, the vog stretched from Hawai'i west and north to Maui, Kaho'olawe, Lana'i, and Moloka'i before disappearing beneath a bank of clouds.

The sulfur dioxide came from Kilauea, the most active volcano in Hawaii in recent time. It has been erupting continuously since 1983. Starting on March 19, 2008, the volcano stepped up its activity, and since that time has pumped out more sulfur dioxide than previously. On November 26, 2008, a measurement of sulfur dioxide at the summit showed that the volcano was releasing 500 tonnes of the gas per day. The average rate between 2003 and 2007 had been 140 tonnes per day, said the Hawaiian Volcano Observatory.

Shortly after noon on December 3, sulfur dioxide concentrations reached unhealthy levels in Hawai'i Volcanoes National Park near the summit of the volcano, said the National Park Service. A little less than 10 minutes after Aqua MODIS captured this image, the Ozone Monitoring Instrument (OMI) on NASA’s Aura satellite also detected high levels of sulfur dioxide over and around the island of Hawai'i. The soupy volcanic haze can aggravate respiratory problems like asthma, emphysema, and bronchitis.

In addition to belching out sulfur dioxide and other volcanic gases, Kilauea oozes lava, consuming everything in its path and creating new land. The fresh lava has built the island to such an extent that 70 percent of the volcano’s surface is less than 600 years old, according to the Smithsonian’s Global Volcanism Program. In this image, a small red dot on the south side of Hawaii outlines the region where the sensor detected a hot spot, most likely lava on or near the surface. (The red dot on the north side of the island is probably a fire.) While the slow-moving lava is destructive and hazardous, the gases rising out of the volcano threaten the health of a larger number of people.

Daily images of Hawai'i are available from the MODIS Rapid Response System.