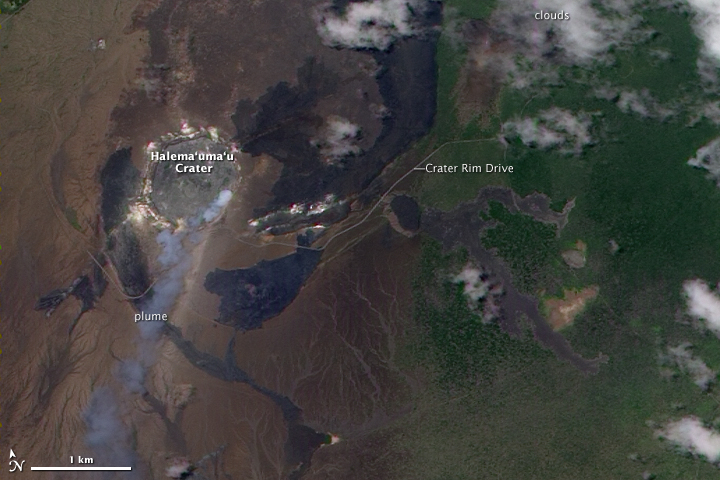 A faint plume blew southward from the Halema‘uma‘u Overlook vent on the Kilauea Volcano on August 19, 2009. The Advanced Land Imager (ALI) on NASA’s Earth Observing-1 satellite captured this true-color image the same day. The volcanic vapor appears ghostly blue-gray, and blows toward the south-southwest from the edge of the crater. Around the crater, the ground is largely devoid of vegetation, instead showing bare rocks of varying shades of brown. Farther east, however, deep green vegetation covers the surface.

According to bulletins issued by the Hawaiian Volcano Observatory on August 19 and 20, 2009, Kilauea had a heightened level of activity, placing it on a watch by the U.S. Geological Survey. The Halema‘uma‘u vent glowed overnight on August 19-20, and sulfur dioxide emissions were elevated.

Kilauea is a shield volcano with a low, broad shape resembling an ancient warrior shield. It overlaps neighboring Mauna Loa, another shield volcano, to the west. Kilauea is one of Hawaii’s most active volcanoes.

his image shows the results of previous eruptive activity at Kilauea’s main crater and the Mauna Ulu crater on the volcano’s flank. A close look at the bare rock around the volcanoes reveals rivulets of rock, slightly darker than their surroundings, flowing from both craters toward the coast. In between areas of bare lava, vegetation has managed to thrive.