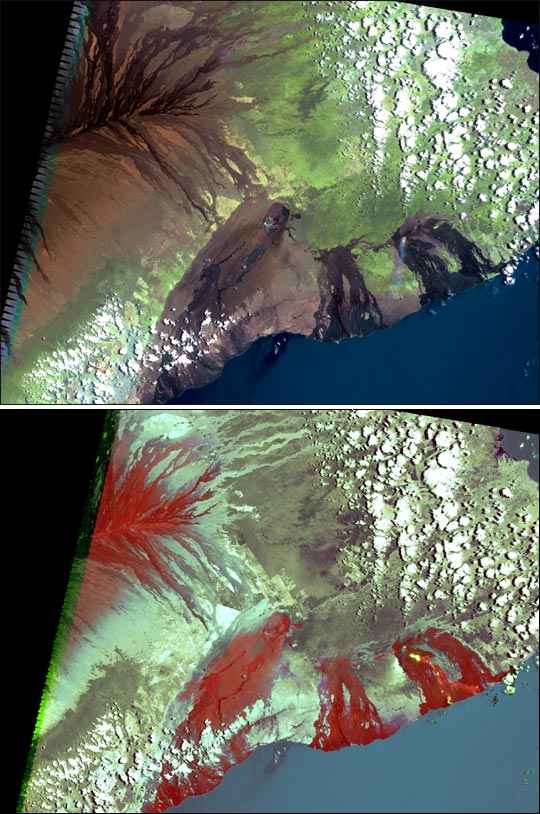 On January 3, 1983, the earth opened near the eastern shore of the Big Island of Hawai'i and a 7-km-long curtain of fire sprang up from the ground in the heart of a pristine, emerald rainforest. Mount Kilauea Volcano had reawakened from its slumber and opened a new crack on its southeastern face--called Pu'u O'o--to vent vast torrents of molten rock. Fountains of molten lava spewed upward through a series of fissures along the volcano's flank, rained down upon the surrounding countryside, and redefined the terrain as it ran in rivers and rivulets toward the sea. That eruption has been going strong ever since.

Pu'u O'o is the longest-lived eruption in the 200-year record of the Kilauea Volcano. Lava production rates are hard to determine, but scientists estimate that Pu'u O'o produces between 300,000 and 600,000 cubic meters of lava per day. In fact, Pu'u O'o's broad field of lava flows have buried more than 102 square km of Kilauea's southern flank and have added more than 205 hectares (560 acres) of new land to the island.

The effects of the Pu'u O'o eruption are evident in this pair of Landsat 7 images acquired on May 23, 2001. This scene covers the southeastern portion of the Big Island of Hawai'i. Both the Kilauea Volcano's caldera, located in Hawai'i Volcanoes National Park, and the active Pu'u O'o eruption are visible. The top image was produced using the Enhanced Thematic Mapper Plus (ETM+) true-color channels (3, 2, and 1). Kilauea's caldera is located toward the northwestern corner (upper left) of the image. The brown hues show volcanic rock, while dark browns and black show relatively recent lava flows that have cooled and solidified into rock. The green hues show forest canopy, white pixels are clouds, and the blue to the south and east is the open Pacific Ocean. Notice the thin plume of steam streaming from one of Pu'u O'o's active lava tubes.

The bottom image is a false-color composite using the ETM+ infrared detectors (channels 6, 7, and 5), which are sensitive to heat. The red regions show solidified rock from previous lava flows. Notice the thin yellow ribbon snaking toward the ocean away from where the steam is venting. This yellow ribbon shows the location of a river of molten rock running beneath the surface--called a lava tube. Such areas are particularly dangerous to hikers and explorers as these tubes may collapse without warning.

For more information, visit the Hawaiian Volcano Observatory and the Hawaii Center for Volcanology.