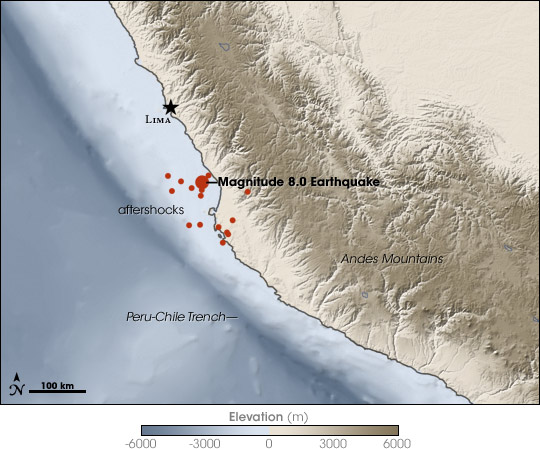 This image shows a combination of land elevation as measured by NASA’s Shuttle Radar Topography Mission (SRTM), and bathymetry—ocean depth, compiled by the British Oceanographic Data Centre. On both land and in the ocean, the lightest colors indicate the elevations closest to sea level. On land, dark brown indicates high-elevation areas, such as mountain ridges. Under water, pale blue indicates shallow-water areas, and darker blue indicates areas of deeper water. The Andes mountains rise steeply along the South American coast, up to altitudes well over 6,000 meters (20,000 feet). The Peru-Chile oceanic trench parallels the Andes, and drops more than 8,000 meters (26,000 feet) below sea level.

The same tectonic activity that has built the Andes has also posed recurring hazards for Peruvians. This earthquake occurred at the boundary between the Nazca and South American tectonic plates, which push together at a rate of 78 millimeters (3.07 inches) per year. Over the years, the South American plate’s seaward movement over the Nazca plate has caused a history of large earthquakes in the region. Two historical earthquakes, in 1908 and 1974, both of a magnitude of 8, occurred near the same spot as the current epicenter. The worst recorded earthquake along Peru’s coast happened in 1868. This magnitude-9 quake spawned a tsunami that claimed several thousand lives along the South American coast.

CNN reported that the initial quake on August 15, 2007, lasted two minutes, and it was followed by aftershocks, including a 6.0-magnitude quake the following day. According to The New York Times, the hardest-hit area appeared to be around the city of Ica, roughly 250 kilometers (150 miles) south of Lima. Ica and surrounding smaller towns lost electricity, and parts of those areas also lost telephone service. In Pisco, a coastal city north if Ica, the mayor estimated that approximately 70 percent of the city was leveled by the quake.

NASA maps by Robert Simmon based on data from the USGS.