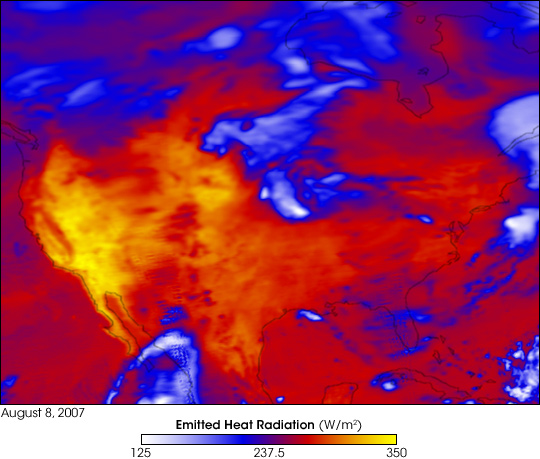 The first full week of August 2007 was a typical August week, with the same temperature patterns settling over North America as Augusts past have brought. In 2007, the heat was record-breaking for some. Temperatures in the upper 90s (Fahrenheit) were reported from the Western Plains to the East Coast, with heat indices reaching triple digits in many places.

The heat wave is clear in this image from the Clouds and the Earth’s Radiant Energy System (CERES) sensor on NASA’s Aqua satellite. The image shows the broiling heat that spanned much of the country on August 8, when temperatures peaked across much of the nation. In this image, heat energy radiated from the Earth (in watts per square meter) is shown in shades of yellow, red, blue, and white. The brightest yellow areas are the hottest (emitting the most energy out to space), while the blue and white areas (clouds) are much colder (emitting the least energy).

The culprit of all this sun and swelter was a high-pressure system keeping the jet stream positioned along the United States-Canada border. The jet stream is a strong, narrow current of westerly winds that occurs at high altitudes. This fast-moving river of air often barricades cooler air masses over Canada, allowing hot air to linger over the United States. On August 8, the hottest areas were in the Southwest (yellow).

The Earth’s average surface temperature is determined by the balance between how much incoming sunlight the surface absorbs and how much thermal infrared energy it radiates back to space. Incoming sunlight is considered “shortwave radiation,” while heat radiated by the Earth is “longwave radiation.” CERES monitors the amount of shortwave energy (sunlight) the Earth reflects as well as the amount of longwave energy (heat) the Earth emits. The Earth’s ability to radiate heat increases with temperature, decreasing water vapor, and decreasing clouds. Greenhouse gases like carbon dioxide and methane reduce the Earth’s ability to radiate heat to space.