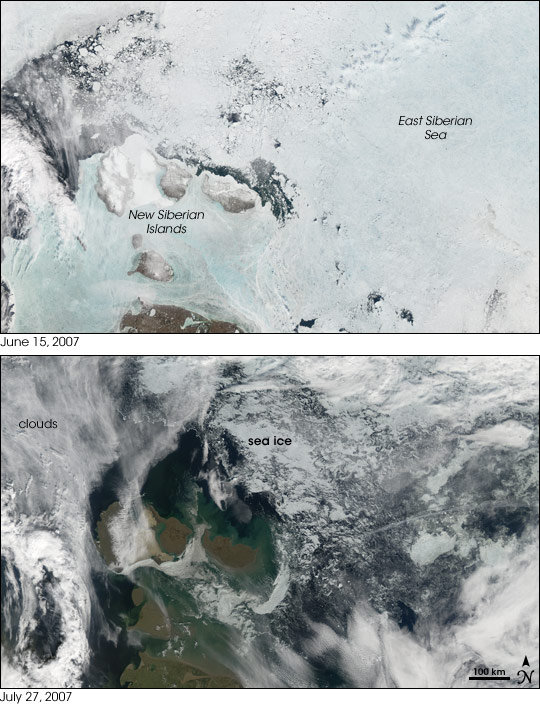 Arctic sea ice melted at an unprecedented rate during the summer of 2007. Much of the melting occurred in the East Siberian Sea. The Moderate Resolution Imaging Spectroradiometer (MODIS) flying on NASA’s Aqua satellite captured part of that region on June 15 and July 27, 2007. These images show a portion of the coast of eastern Siberia and the New Siberian Islands, roughly 1,900 kilometers (1,200 miles) northwest of Alaska. Despite some cloud cover, the images show pronounced sea ice retreat over a period of 42 days.

In the June 15 image, floating sea ice clings to the Siberian coast, extending northward to the New Siberian Islands. North of the islands, dark areas of ocean water appear in between small slabs of ice, especially in the northwest. To the northeast, however, the ice pack appears solid, and the clouds overhead cast their pale gray shadows onto the ice. The ice’s blue-green tint suggests that melting is well underway.

In the July 27 image, open water dominates. The area between the Siberian coast and the New Siberian Islands is largely ice-free, with only a few pieces of ice attached to the islands’ southern shores. The water is almost completely open to the islands’s immediate northwest. Northeast of the islands, the sea ice remaining in the area is sparse.

Photo-like images such as these are just one method of observing sea ice, and NASA operates a variety of satellite sensors to assess sea ice health. Using data from other NASA sensors, the University of Illinois and the National Snow and Ice Data Center (NSIDC) both reported record melting in Arctic sea ice in 2007. Both reports agreed that these values—occurring more than a month before the typical end of the melt season—virtually assured that 2007 Arctic sea ice minimum would sweep aside the previous record set in 2005.

In its report, NSIDC tracked the rate of ice melt in the Arctic since the beginning of 2007, and found that on July 1, 2007, melting spiked to a degree never before observed in the satellite record. At the beginning of the 2007 melt season, ice conditions resembled those of an average year, but in June, melting accelerated. Warm temperatures and unusually clear skies played a role, but so did other factors. Atmospheric circulation patterns that tended to flush ice out of the Arctic continued from previous years, and NSIDC cited growing evidence that Arctic sea ice had shifted from thick ice to thin ice that melts more rapidly. During a two-week period in late June and early July, Arctic sea ice declined as much as 210,000 square kilometers (81,081 square miles) per day. Although ice declines occurred throughout the Arctic, ice loss in the East Siberian Sea accounted for most of the sea ice loss detectable by early July.

You can download a 250-meter-resolution KMZ file of the East Siberian Sea suitable for use with Google Earth.