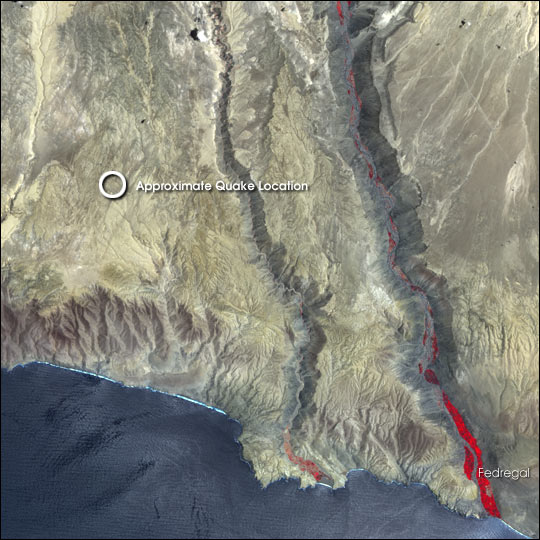 A massive earthquake hit coastal Peru on June 23, 2001, near the tiny town of Fedregal. With a magnitude of 8.1, the quake toppled historic buildings in Arequipa, 120 miles (190 km) away. The earthquake occurred 20 miles (33 km) underground at the boundary between the Nazca and South American tectonic plates. The Nazca plate is being pushed under (subducted by) the South American plate, a process which not only causes earthquakes, but also volcanism and the raising of the Andes Mountains.

The above image was taken by the Advanced Spaceborne Thermal Emission and Reflection Radiometer (ASTER) aboard NASA's Terra spacecraft on December 15, 2000, several months before the quake hit. The image is a false color composite composed of near-infrared, red, and green light, displayed as red, green, and blue, respectively. Vegetation appears bright red. The coastal cliffs and deep stream valleys running from north to south (top to bottom) across the image indicate the rapid rise (in geologic terms) of the terrain.

For more information, read Earthquake Near Coast of Peru, from the U.S. Geological Survey.