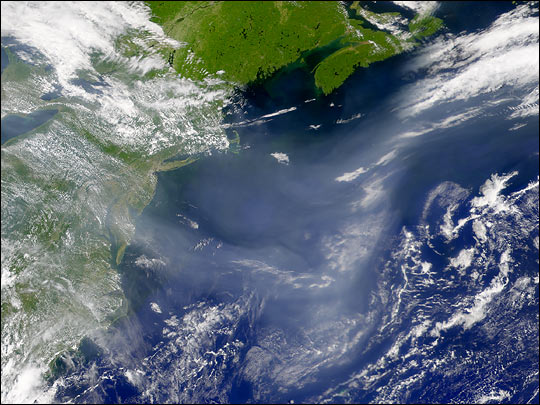 A whitish haze drifts out over the Atlantic Ocean from the mid-Atlantic United States. This Sea-viewing Wide Field-of-view Sensor (SeaWiFS) image acquired on June 28, 2001, shows a shroud of aerosol draped over much of the eastern U.S., including parts of Virginia, Maryland, and Pennsylvania. The aerosol could be a mixture of pollution, smoke, and cirrus clouds, and indeed many eastern cities, including Washington, DC, and Baltimore, MD, were under poor air quality advisories June 26-29.

For more information and ground photographs of similar events, visit the Earth Pic of the Day.

Haze over the Atlantic Seaboard