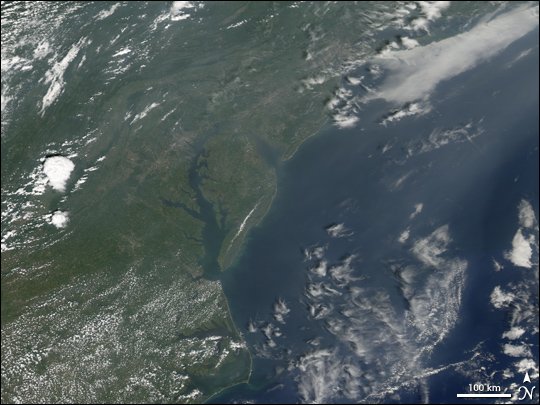 Haze dulled this picture of the mid-Atlantic states, taken on August 25, 2007, by the Moderate Resolution Imaging Spectroradiometer (MODIS) flying on NASA’s Aqua satellite. In this image, a wide band of haze hangs over the eastern seaboard and the Atlantic, with clouds floating overhead.

An August 25, 2007, posting on the U.S. Air Quality-Smog Blog at the University of Maryland, Baltimore County, described poor air quality, including unhealthy ozone levels in parts of Maryland and New Jersey. Local pollution was listed as a possible culprit.

You can download a 250-meter-resolution KMZ file of the U.S. East Coast suitable for use with Google Earth.

Haze off the U.S. East Coast