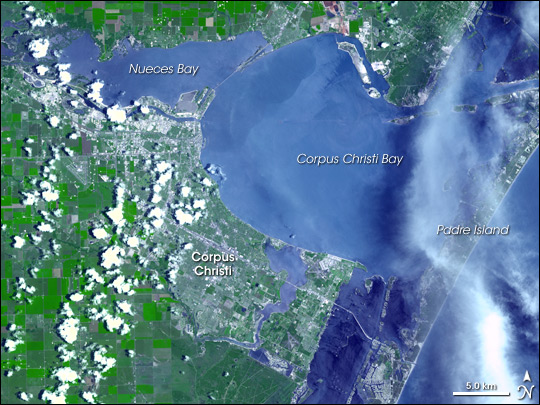 The city of Corpus Christi, Texas, is tucked against the southern shore of Corpus Christi Bay on the Gulf of Mexico. Inland, the city is surrounded by the large, green grid of croplands. To the south and east, the landscape is dominated by marshes, lagoons, and barrier islands, the longest of which is Padre Island. Although the part of Padre Island visible in this scene is developed with roads, residences, and resorts, just south of the southern edge of the scene, Padre Island National Seashore begins. The seashore is the longest remaining undeveloped stretch of barrier island in the world.

These factors combine to make the system particularly sensitive to accumulation of water pollutants and salt, which compromises the health of the plants and animals that live in the estuary (including commercially and recreationally important species such as oysters and shrimp.) For these reasons, the Environmental Protection Agency has included the Corpus Christi Bay Estuary in its National Estuary Program. Their goal is to develop water re-use and conservation strategies that will meet urban, agricultural, and ecological needs as the city continues to grow.

Satellite images such as this view from the Advanced Spaceborne Thermal Emission and Reflection Radiometer (ASTER) on NASA’s Terra satellite captured on June 29, 2007, can document land cover changes such as the conversion of natural landscapes to cropland, or cropland to urban development. Information on how fast and where changes are occurring can help scientists and urban planners predict future water supply and demand.