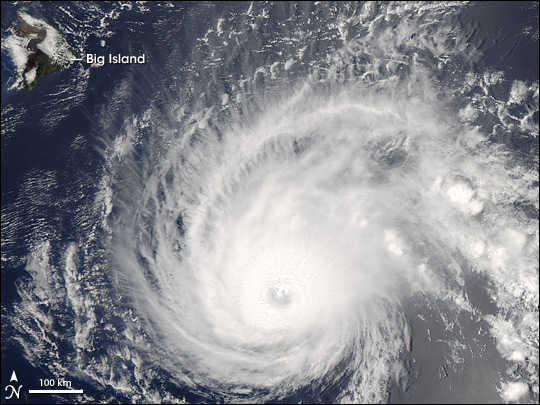 Hurricane Flossie built itself up into a powerful Category 4 hurricane as it traveled through the central Pacific Ocean in mid-August. By August 13, it had weakened to a Category 3 storm, and as of the morning of August 14, the hurricane was predicted to pass within 100 miles of the Hawaiian Islands, bringing strong winds and heavy rain, particularly to the southern end of the Big Island. A hurricane watch, tropical storm warning, and flash flood watch were issued for the islands, and schools on the Big Island were all closed for the day as a precaution, said news reports.

At 1:10 p.m. local time (23:10 UTC) on August 13, 2007, when the Moderate Resolution Imaging Spectroradiometer (MODIS) on NASA’s Aqua satellite captured this image, Hurricane Flossie was a Category 3 hurricane. The hurricane had a large spiral shape and its central eye was well-defined, although filled with clouds (known as a “closed eye.”) These characteristics are typical for powerful cyclones. Sustained winds were measured at 195 kilometers per hour (120 miles per hour) at the time of this MODIS image according to the University of Hawaii’s Tropical Storm Information Center.

You can download a 250-meter-resolution KMZ file of Hurricane Flossie suitable for use with Google Earth.

Hurricane Flossie grew to be a Category 4 storm in the eastern Pacific in mid-August 2007.