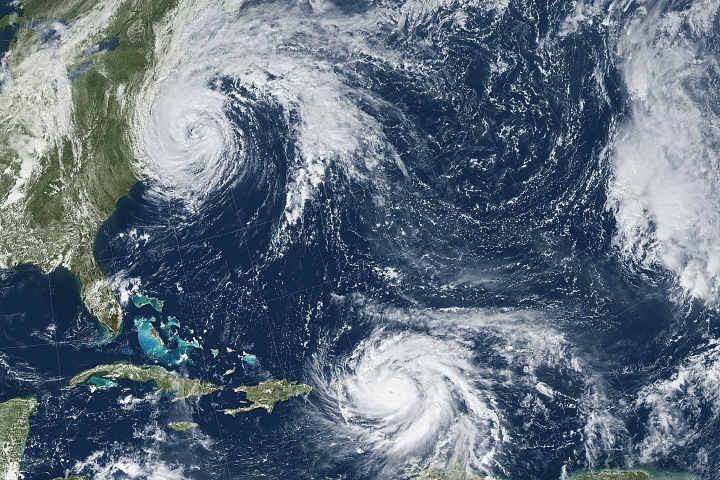 Less than two weeks after Irma blasted through several Caribbean islands and Florida, another major hurricane is battering the region. Category 5 Hurricane Maria devastated the island of Dominica on the night of September 18 and was headed for landfall on the heavily populated island of Puerto Rico on September 20, 2017. At the same time, a weakening Hurricane Jose approached the New England coast as it transitioned into a nor'easter-like extratropical storm.

Geostationary Operational Environmental Satellite 13 (GOES-13 or GOES East) acquired the data for these images at 1:15 p.m. local time (17:15 Universal Time) on September 19, 2017. Data from the high-resolution visible channel (band 1) is overlaid on a MODIS blue marble. The satellite is operated by the National Oceanic and Atmospheric Administration (NOAA), while NASA helps develop and launch the GOES series of satellites.

Hurricane Maria evolved from a category 1 storm to a category 5 storm in less than 18 hours on September 18, just before it blew straight across Dominica (population 72,000). At the time of landfall, sustained winds were reported to be 160 miles (260 kilometers) per hour, with a central barometric pressure of 924 millibars. It is the fifth time on record that Dominica has taken a direct hit from a hurricane.

Early reports described roofs being blown off of many buildings, and most communications have been cut off by the storm. Prime Minister Roosevelt Skerrit described the damage to his nation as “mind boggling.” According to preliminary reports, the neighboring islands of Guadeloupe and Martinique did not appear to be hit as hard, though damage was still extensive. 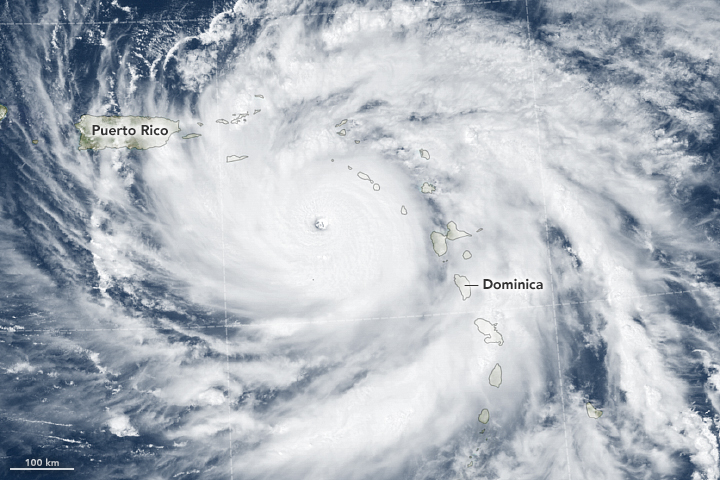 Several meteorologists noted that Maria had a very small, tight eye—sometimes called a “pinhole eye”—that was about 10 miles (16 kilometers) in diameter. Such tightly formed storms have been observed to spin faster. The storm briefly weakened to category 4 after crossing Dominica but then re-intensified to category 5.

Maria was expected to pass over the Virgin Islands overnight and to make landfall in Puerto Rico on September 20 as a category 4 or 5 storm with a storm surge of 6 to 9 feet. Forecasters described it as a “potentially catastrophic” hurricane. 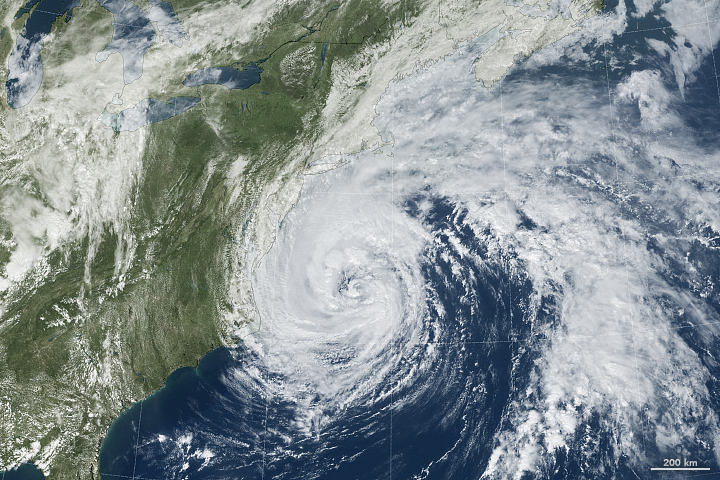 Meanwhile, Hurricane Jose approached the New England coast on the evening of September 19, bringing high surf, strong coastal currents, and tropical storm force winds. The hurricane has been meandering in the Atlantic since September 6. Heavy rain is being forecast for Long Island and southern Connecticut, Rhode Island, and Massachusetts.