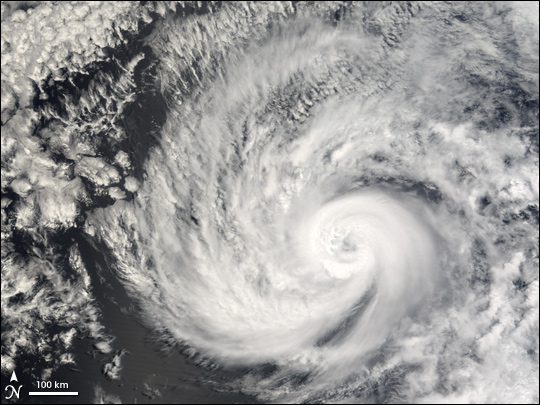 Hurricane Cosme was the third named storm in the 2007 eastern Pacific hurricane season. Cosme formed in a common area for hurricanes to start—off the Pacific coast of Mexico—and it tracked north and west. Cosme built power from its initial Tropical Depression state on July 14 to a minimal Category 1 hurricane on July 16.

At 10:45 a.m. local time (19:45 UTC) on July 16, 2007, when the Moderate Resolution Imaging Spectroradiometer (MODIS) on NASA’s Terra satellite captured this image, Hurricane Cosme was at its brief peak as a Category 1 storm. The hurricane had a well-defined spiral shape, but it was relatively small and its central eye was filled with clouds (known as a “closed eye”). Sustained winds were measured at 120 kilometers per hour (75 miles per hour) according to the University of Hawaii’s Tropical Storm Information Center, at the time of this MODIS image.

Conditions for Hurricane Cosme to intensify were poor, and by July 17, it had downgraded back to tropical storm status. The storm was projected to continue on a mostly westward track toward Hawaii, according to the Joint Typhoon Warning Center on July 17, 2007. The forecast at that time called for Cosme to brush the Big Island of Hawaii on July 22 as a tropical storm.

You can download a 250-meter-resolution KMZ file of Hurricane Cosme suitable for use with Google Earth.