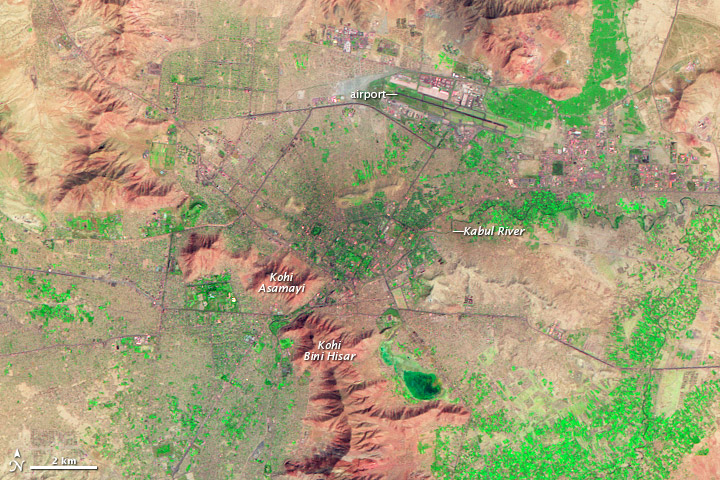 For more than 3,000 years, Kabul has occupied a strategic location along Central and Southern Asian trade routes, and governance of the city has changed hands repeatedly throughout that time. In the late eighteenth century, Kabul was established as Afghanistan’s capital, and industrialization and urbanization increased rapidly starting in the twentieth century. With the invasion of the Soviet Union in 1979, however, growth stagnated. Armed conflict, including the U.S. invasion in 2001, dominated the city in the decades that followed. The city began growing quickly once again after the turn of the twenty-first century.

The Thematic Mapper sensor on NASA’s Landsat 5 satellite acquired this false-color image on September 24, 2009. Vegetation appears fluorescent green, urban areas range in color from gray to black, and bare ground varies in color from beige to reddish brown. A mountain range, including Kohi Asamayi and Kohi Bini Hisar, snakes through the scene, running roughly northwest-southeast. More peaks appear in the northeast, right next to an airport—identifiable by its long, straight runway. Urbanization appears densest at the city’s center, just southwest of the airport, and it stretches out toward the right side of the image along an east-west highway. Leaping a mountain boundary, cityscape also fills the lower-left quadrant of the image.

Based on past growth statistics, Kabul has been ranked among the top five cities in the world forecast to grow rapidly between 2006 and 2020. Multiple factors have contributed to the city’s recent expansion, including migration away from violence in Afghanistan’s countryside and employment opportunities in construction or military sectors. According to the Central Statistics Organization of Afghanistan, the city’s population was estimated at roughly 3.57 million in 2009.

The rapid growth has strained the city’s infrastructure. Less than half of Kabul’s residents have indoor plumbing, and the lack of storm drains has left the city vulnerable to flooding after even minor rains. Partly constrained by surrounding mountains, Kabul’s primary direction for growth has been vertical, with multistory buildings constructed atop existing structures.

Acquired September 24, 2009, this false-color image shows the rapidly growing city of Kabul, Afghanistan. Vegetation is green, urbanized areas are gray to black, and bare ground is beige to red-brown.