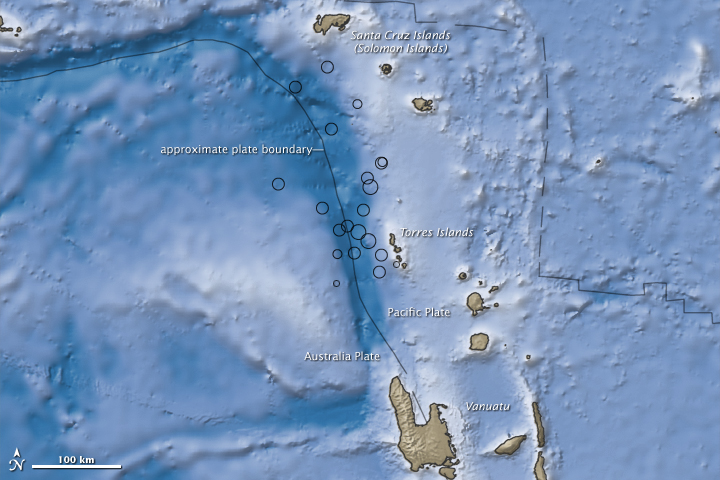 On October 8 and 9, 2009, more than a dozen earthquakes of magnitude 5.0 or greater occurred near the island nation of Vanuatu, according to the U.S. Geological Survey. The strongest quake, occurring at 9:18 a.m. local time on October 8, had a magnitude of 7.8. Authorities issued but later rescinded a tsunami warning for surrounding nations and territories. Heeding the warning, some residents sought refuge on higher ground, but the resulting waves proved small and caused no apparent damage.

This map shows the region surrounding the earthquakes that occurred on October 7 and 8, 2009. Ocean areas appear in shades of blue, and land areas appear in shades of brown. Both in water and on land, higher elevation appears in lighter colors. Black circles mark earthquake locations determined by the USGS, and circle sizes correspond with quake magnitudes. A curving black line delineates the approximate boundary between the Australia and Pacific Plates.

The USGS stated that the earthquakes all occurred on or near the Australia-Pacific Plate boundary, at depths between 29.5 and 35.0 kilometers (18.3 and 21.7 miles). Most of the quakes occurred at a depth of 35 kilometers. In this region, the Australia Plate moves east-northeast in relation to the Pacific Plate. The Australia Plate moves at approximately 91 millimeters (3.58 inches) per year. This region ranks among the world’s most seismically active.

The earthquakes that struck near Vanuatu occurred on October 8 and 9 in the local time zone, and on October 7 and 8 by UTC time.

This map shows the region surrounding the earthquakes that occurred near Vanuatu on October 7 and 8, 2009. Ocean water appears in shades of blue, and land areas appear in shades of brown. Circles mark earthquake locations, and a black line marks the tectonic plate boundary.