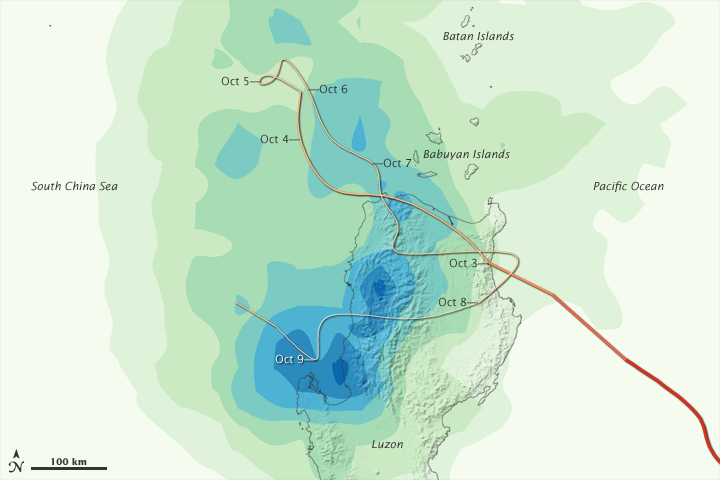 Typhoon Parma spent nearly a week pouring heavy rain on the northern half of the Philippine island of Luzon. The resulting floods and landslides killed at least 160 people, reported BBC News. This image shows both the storm’s track and the rainfall that accumulated between October 2 and October 8, 2009. The rainfall data are from the Multisatellite Precipitation Analysis, which includes rainfall observations from many satellites that are calibrated to match more detailed rainfall observations from the Tropical Rainfall Measuring Mission (TRMM) satellite. The satellites recorded more than 700 millimeters (28 inches) of rain in places, shown in dark blue.

The heaviest rain fell on the mountain range that runs north to south along the length of the island, the Cordillera Central. Damages came from landslides on the slopes of the mountains and from floods caused by water flowing out of the mountains west to the South China Sea. The largest area of heavy rain sits over the Lingayen Gulf, the “u”-shaped body of water on the western shore of Luzon near the bottom of the image. One province in this region, Pangasinan, was between 60 and 80 percent flooded, reported BBC News. The highest death toll came from another province, Benguet, a little north and east of Lingayen Gulf, where landslides impacted several villages, said BBC News.

The storm came ashore from the east and crossed the northern tip of the island on October 3, 2009. Under the influence of nearby Typhoon Melor, Parma stalled offshore, unleashing yet more rain on Luzon while spinning in place on October 4-5. Finally, the storm reversed direction and moved back across the Philippines toward Typhoon Melor on October 7. By October 8, Melor’s influence on Parma weakened, and Parma moved west again to make its third trip across Luzon Island. Many of the areas of heavy rain coincide with areas that likely saw Parma’s most intense inner bands more than once throughout the course of the week.

Parma is the second typhoon to flood Luzon in a two-week span. Tropical Storm Ketsana dropped a month’s worth of rain on the Philippine capital, Manila, and other locations in southern Luzon on September 26, 2009. Manila experienced its worst floods in 40 years. The floods caused by Ketsana left more than 300 people dead, said BBC News.

Typhoon Parma dumped up to 700 millimeters of rain over northern Luzon, Philippines, over the course of a week, as illustrated in this map of rainfall totals between October 2 and October 8, 2009.