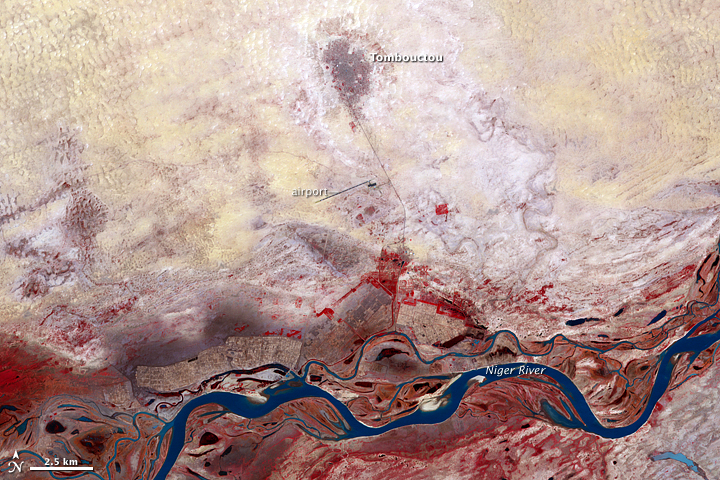 In the late eighteenth century, a group of aristocratic British gentlemen formed the Association for Promoting the Discovery of the Interior Parts of Africa. The association particularly hoped to find the fabled, fabulously wealthy city of Tombouctou (also known as Timbuktu or Timbuctoo). The gentlemen did not know that the city they sought had long been in decline. Centuries earlier, however, Tombouctou had indeed been a prosperous center of gold and salt trade across the Sahara, and a center of Islamic scholarship.

The Advanced Spaceborne Thermal Emission and Reflection Radiometer (ASTER) on NASA’s Terra satellite captured this false-color image of Tombouctou, Mali, on March 6, 2001. Vegetation appears red, water appears blue, human-built structures appear brown-gray, and land with little or no vegetation varies in color from off-white to tan. Bare ground dominates much of the image as Tombouctou is nearly surrounded by desert. South of the city, the runway for a small airport leaves a long, straight line on the arid landscape.

South of the city, the land changes dramatically, thanks to the vegetation-lined Niger River. Flowing from west to east, the Niger River occupies a network of braided stream channels with small, skinny waterways branching out from the main river. The Niger passes through diverse environmental conditions on its route. Near its source in Guinea, rainfall averages 2,300 millimeters (90 inches) a year. Between Tombouctou and Bourem (a city farther east along the river’s route), annual rainfall drops to less than 250 millimeters (10 inches). Southwest of Tombouctou lie the marshes of the Niger Inland Delta.

Its proximity to the river long made Tombouctou a center of trade and learning. The city started as a seasonal camp used by Tuareg nomads around the year 1100. Within a few centuries, it was part of the Mali Empire, and a center of trade. Tombouctou also became a center of Islamic culture, home to three of West Africa’s oldest mosques as well as a university. Captured by Morocco in 1591, however, Tombouctou began a long, slow decline. The site’s historic significance earned the city its status as a World Heritage site in 1988.

Acquired March 6, 2001, this false-color image shows Tombouctou (Timbuktu) and the surrounding region. Vegetation is red, water is blue, human-built structures are brown-gray, and bare ground ranges in color from off-white to tan.