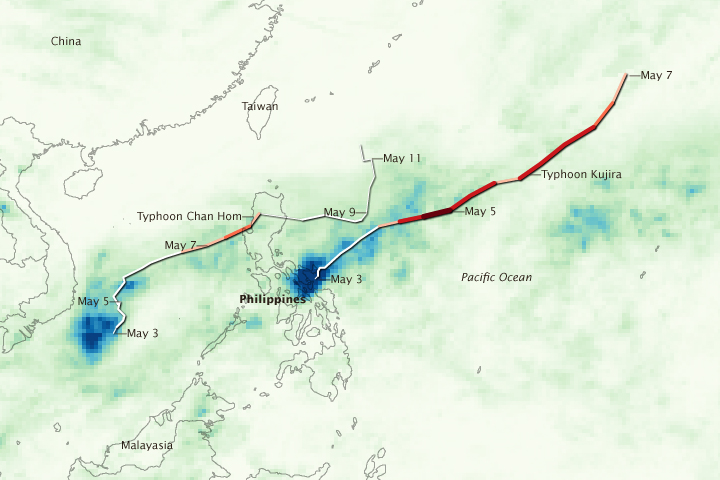 Within a week’s time, the northern Philippines island of Luzon was hit by two tropical cyclones. On May 2 and May 3, 2009, Tropical Storm Kujira inundated parts of southern Luzon in the northeast-central Philippines with torrential rains. On May 7, Typhoon Chan-hom (known locally as "Emong") made landfall on the northwest coast of Luzon, bringing strong winds, heavy rains, and yet more flooding to the beleaguered island. The distribution of rain from the two storms is shown in this image.

The image is based on data from the Tropical Rainfall Measuring Mission (TRMM) satellite, which was launched in November 1997 with the objective of measuring rainfall over the tropics. In addition to making direct rainfall measurements, TRMM data are used to calibrate rainfall estimates from other satellites. This image was made with such TRMM-calibrated data from the near-real-time, Multi-satellite Precipitation Analysis (TMPA) between May 1 and May 10.

The most extreme rainfall totals, located over southern Luzon, are associated with Tropical Storm Kujira. The storm lingered over the region, dumping 600 millimeters or more (about 24 inches) of rain, shown in dark blue. After pulling away from the island, Kujira developed into a powerful typhoon. The fast-moving Typhoon Chan-hom roared ashore over northern Luzon on May 7, where it dropped about 150 mm (6 inches) of rain (green). The large difference in rainfall between the two storms was due to the difference in their forward motion and not their intensity—Kujira was a slow-moving tropical storm at the time, while Chan-hom was a fast-moving typhoon.

The two storms together left at least 63 people dead, reported the AFP wire service on May 10. Most of the fatalities occurred as a result of landslides and floods. Additional images of the two storms are available on the TRMM Website.

Between May and October 2009, 12 tropical cyclones poured rain over the Philippine Islands. This image illustrates how much rain fell over the islands when the storms were active.