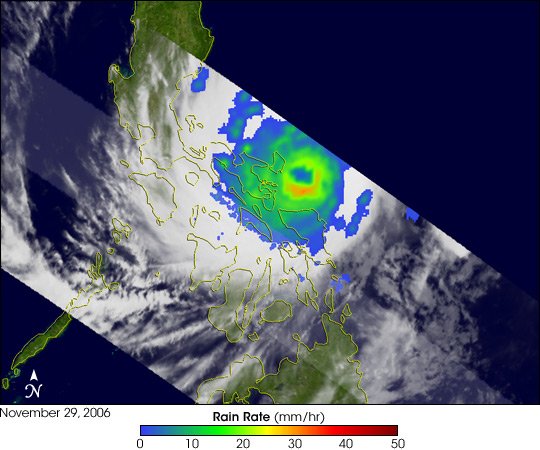 The northern Philippines island Luzon suffered yet another direct hit from a super typhoon this season when Super Typhoon Durian (known as “Reming” in the Philippines) made landfall on the southeastern part of the island on November 30, 2006. The Philippine weather service recorded sustained winds of 190 kilometers per hour (118 mph) with gusts to 225 kph (140 mph) when the storm came ashore. Luzon was hit hard in 2006. Super Typhoon Xangsane also hit the southern part of the island on September 27. Super Typhoon Cimaron struck northern Luzon on the evening of October 29, and Typhoon Chebi hit northern Luzon on November 11.

The 24th tropical depression of the Western Pacific season formed early on the morning of November 26 (local time) south of Guam and became a minimal tropical storm, named Durian, later that same day. The Tropical Rainfall Measuring Mission (TRMM) satellite captured this image of Durian on November 29, by which time the storm had reached super typhoon status, with winds of 240 kilometers per hour (150 miles per hour). The image was taken at 6:50 a.m. local time (22:50 UTC) as Durian was bearing down on Catanduanes Island in the central Philippines.

The image shows rain intensity in different parts of the storm system. Rain rates in the center of the swath are from the TRMM Precipitation Radar, while those in the outer portion are from the TRMM Microwave Imager. The rain rates are overlaid on infrared data from the TRMM Visible Infrared Scanner. Although the center of the storm does not fall within the swath observed by the Precipitation Radar in this image, it is clear from the Microwave Imager portion of the image that Durian had a well-defined eye surrounded by a symmetric eyewall (green ring). The extreme cyclonic winds in intense storms tend to smear out eyewall features.

Soon after this image was taken Durians northern eyewall passed over Virac on the southern tip of Catanduanes Island. The center then made landfall along the southeastern portion of Luzon in the province of Albay before continuing westward through the central Philippines.

The TRMM satellite was placed into its low-earth orbit in November 1997. Its primary mission is to measure rainfall from space; however, it has also served as a valuable platform for monitoring tropical cyclones, especially over remote parts of the open ocean. TRMM is a joint mission between NASA and the Japanese space agency, JAXA.