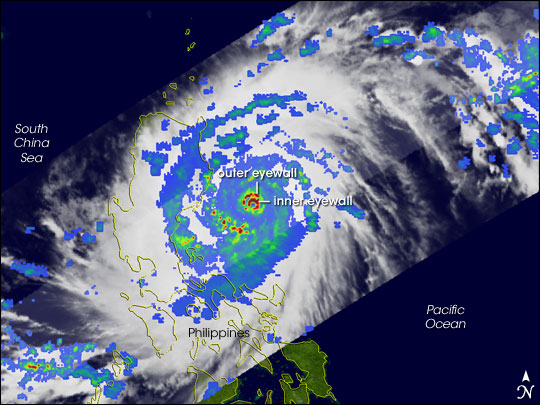 The northern Philippines Island Luzon suffered a direct hit from powerful Super Typhoon Cimaron over the weekend of October 28-29, 2006. The typhoon struck the east coast of Luzon on the evening (local time) of October 29 with sustained winds of 200 kilometers per hour (124 mph) and gusts to 230 kilometers per hour (143 mph). The storm killed at least 15 people. After crossing Luzon in the Philippines, Cimaron re-emerged over open waters in the South China Sea and as of October 31 was expected to make a second landfall on the coast of Vietnam.

This image of Cimaron was captured by the Tropical Rainfall Measuring Mission (TRMM) satellite as the powerful storm was bearing down on Luzon. Places with the highest rainfall are colored red, while areas with the lowest rainfall are blue. The image was taken at 1:40 p.m. local time in Manila (05:40 UTC) on October 29, not long before Cimaron made landfall. TRMM reveals that Cimaron was undergoing eyewall replacement, during which the centermost ring of thunderstorms clouds (the eyewall) weakens and is ”swallowed up” by a new eyewall of thunderstorms that encroached on the eye of the storm from the spiraling rain bands.

This eyewall replacement cycle is evident in the TRMM image from the distinct double eyewall structure. Cimaron’s compact inner eyewall of intense rain (small, dark red ring) is surrounded by a nearly complete outer eyewall of intense to moderate rain (concentric ring of dark red and green). This double, or concentric, eyewall feature is only found in very powerful, mature tropical cyclones. Near the time of this image, Cimaron was a Category 5 super typhoon with maximum sustained winds estimated at 140 knots (161 mph) by the Joint Typhoon Warning Center.

The rain rates in the center of the swath are from the TRMM Precipitation Radar, while those in the outer portion are from the TRMM Microwave Imager. The rain rates are overlaid on infrared data from the TRMM Visible Infrared Scanner. TRMM was placed into its low-earth orbit in November 1997. Its primary mission is to measure rainfall from space; however, it has also served as a valuable platform for monitoring tropical cyclones, especially over remote parts of the open ocean. TRMM is a joint mission between NASA and the Japanese space agency, JAXA.

A KMZ file of Super Typhoon Cimaron is available for use with Google Earth.