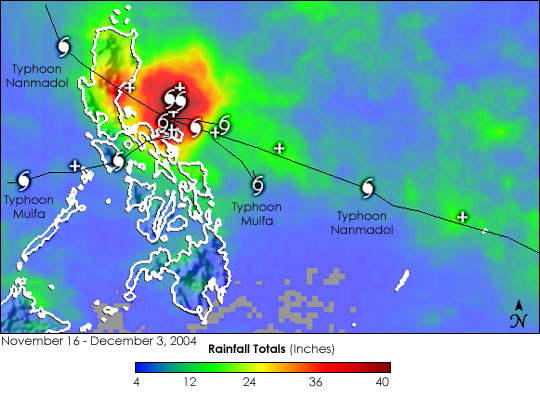 A series of tropical storms has resulted in catastrophic flooding and a massive loss of life across parts of the Philippines. As of December 7, 2004, the number of dead and missing exceeded 1400. First, Typhoon Muifa struck the north-central Philippines in mid-November, followed immediately by a small tropical depression. Next, a tropical storm known locally as “Winnie” hit the northern Philippines on the November 29, 2004. Finally, Typhoon Nanmadol made landfall in the northern Philippines on December 2. By far the most damaging of these storms was Winnie, which accounted for over 1200 of the dead and missing even though it was the weakest of the three systems. Rainfall accumulations from tropical cyclones are most closely related to storm movement and not intensity.

The TRMM-based, near-real time Multi-satellite Precipitation Analysis (MPA) at the NASA Goddard Space Flight Center monitors rainfall over the global tropics. The first image shows MPA rainfall totals for November 16 through December 3, 2004. Overlaid on the rainfall totals are the tracks associated with the passage of Typhoons Muifa and Nanmadol. Muifa moved northwest parallel to the Philippines before slowing and making a loop east of Luzon. The storm then moved west-southwest cutting across the north-central islands. Nanmadol started further east and moved steadily west-northwest before crossing the northern part of Luzon. The highest amounts recorded by the MPA are on the order of 50 inches (1.27 meters—darkest red areas). These amounts are mainly offshore east of the northern island of Luzon and are due primarily to Muifa. However, just north of Dingalan Bay along the eastern side of Luzon, rainfall totals exceed 40 inches (1 meter—smaller red area). Most of the rainfall is a result of Winnie and Nanmadol. Similar amounts fell over parts of southeastern Luzon and the island of Catanduanes. In fact, nearly the entire island of Luzon received 15 inches (0.38 meters) of rain (green areas) or higher for the period. Torrential downpours over the eastern slopes of the mountainous and hilly terrain in northern Luzon led to massive mudslides and flash floods and accounted for the greatest loss of life. The towns of Infanta, Real and General Nakar bore the brunt of the flooding.

After four tropical storms in two weeks, Luzon is reeling under severe floods. This TRMM image shows rainfall accumulated over the past two weeks.

Extreme Rainfall in The Philippines

Super typhoon Koppu (Lando) dropped nearly a meter of rain on parts of Luzon, leading to destructive floods and landslides.