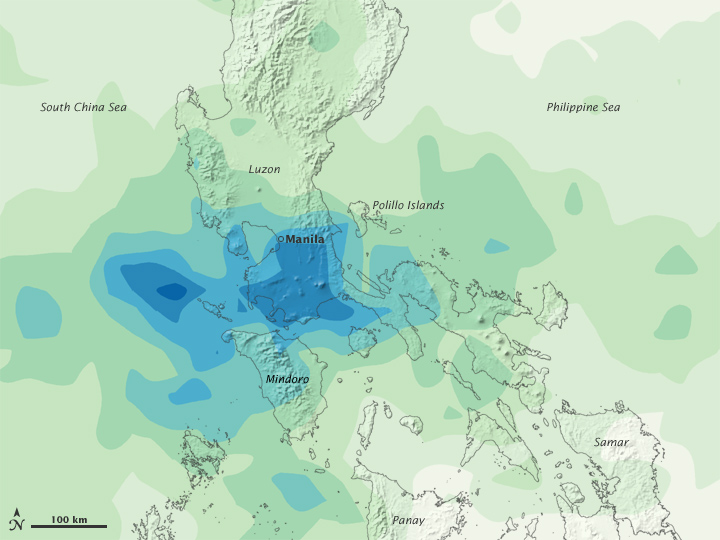 On September 26, 2009, Tropical Storm Ketsana dropped a month’s worth of rain in a matter of hours on the Philippine capital of Manila. Streets resembled rivers, covered by water that was chest high and still rising, according to news reports. Over the next few days, death tolls climbed from dozens to over 200, with more casualties expected as search and rescue efforts continued. As of September 28, more than 100,000 people had taken refuge in evacuation centers, and more than 330,000 were believed to be affected.

The rainfall estimates shown in this image were produced by the near-real-time, multi-satellite precipitation analysis at NASA’s Goddard Space Flight Center. The analysis is based largely on observations from the Tropical Rainfall Measuring Mission (TRMM) satellite. The highest rainfall amounts—more than 600 millimeters (23.6 inches)—appear in blue. The lightest amounts appear in pale green. Gray shading indicates topography throughout the Philippines.

Rainfall occurs over the entire region shown in this image. The heaviest pocket of rain appears off the west coast of southern Luzon, over the South China Sea. A large expanse of heavy rain stretches from that locality across southern Luzon. An area of heavy rain also occurs immediately south of the capital city.

The flooding that struck the region in late September 2009 was the worst in more than 40 years. Officials declared a “state of calamity” in Manila and 25 provinces affected by the storm. 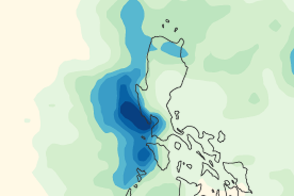 Typhoon Parma dumped up to 700 millimeters of rain over northern Luzon, Philippines, over the course of a week, as illustrated in this map of rainfall totals between October 2 and October 8, 2009.