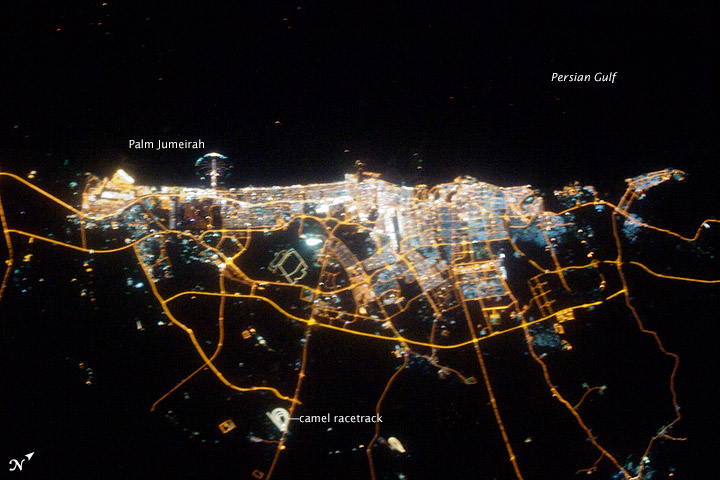 The city of Dubai is the largest metropolitan area in the emirate of Dubai, one of the member states of the United Arab Emirates. Dubai is located along the southern Persian Gulf on the Arabian Peninsula, and its signature city is known for high profile architectural and development projects. Among the most notable is the Palm Jumeirah, a man-made peninsula and surrounding islands built from over 50 million cubic meters of sand. Three other island projects, two similar to Palm Jumeirah and another crafted to look like a map of the world, are also underway along the Dubai coastline.

This nighttime astronaut photograph of the city of Dubai was taken at approximately 2 a.m. local time on September 11, 2009. Orange sodium vapor lights trace the major highways and street grid in and around the metropolitan area, while grey-white mercury vapor lamps fill in the commercial and residential areas. The lighted islands and peninsula of Palm Jumeirah are clearly visible along the coastline. A spiral pattern of lights on the southeastern fringe of the urban area is a camel racetrack. Nighttime images like these are useful to climate modelers, urban planners, and geographers as they allow for simple definition of urban (densely lit) and rural (sparely lit) areas.

Astronaut photograph ISS020-E-39932 was acquired on September 11, 2009, with a Nikon D3 digital camera fitted with an 80 mm lens, and is provided by the ISS Crew Earth Observations experiment and Image Science & Analysis Laboratory, Johnson Space Center. The image was taken by the Expedition 20 crew. The image in this article has been cropped and enhanced to improve contrast. Lens artifacts have been removed. The International Space Station Program supports the laboratory to help astronauts take pictures of Earth that will be of the greatest value to scientists and the public and to make those images freely available on the Internet. Additional images taken by astronauts and cosmonauts can be viewed at the NASA/JSC Gateway to Astronaut Photography of Earth. Caption by William L. Stefanov, NASA-JSC.

This nighttime astronaut photo shows the city lights of Dubai in the United Arab Emirates on September 11, 2009.