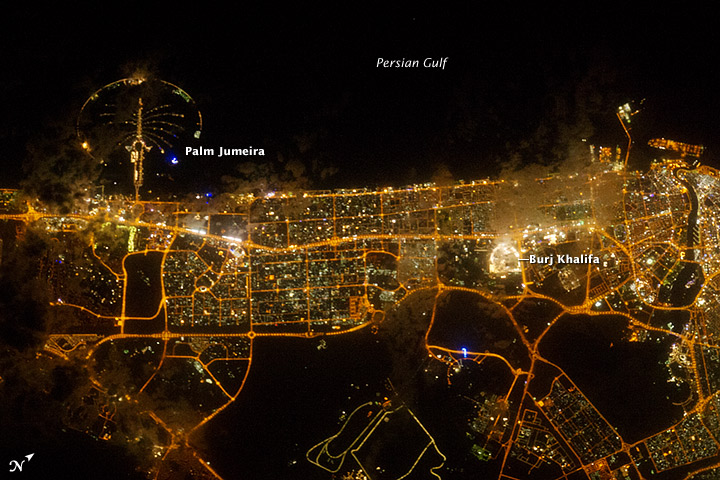 The city of Dubai—the largest metropolitan area within the emirate of Dubai—is a favorite subject of astronaut photography largely due to the unique island developments situated directly offshore in the Persian Gulf. These artificial archipelagos have been built such that their full design is only visible from the vantage point of an airplane—or an orbiting spacecraft such as the International Space Station (ISS). Advancements in handheld camera technology and capabilities are also improving the ISS crew’s ability to capture detailed night time imagery; compare the image above with this image of the city of Dubai taken on September 11, 2009.

The eye-catching appearance of the city at night displays the urban development pattern. In this image—taken with a long focal-length lens and digital camera optimized for fast response and high light sensitivity—several interesting patterns can be observed. The highways and major streets are sharply defined by yellow-orange lighting, while the commercial and residential areas are resolved into a speckle pattern of individual white, blue, and yellow-orange lights. Several brilliantly lit areas are large hotel and mall complexes, including the Burj Khalifa Tower. At 828 meters (2,717 feet), it is the world’s tallest building.

The brilliant lighting of the city contrasts sharply with both the dark Persian Gulf to the northwest, and largely undeveloped and unlit areas to the southeast. Likewise, the clusters of lighting in the Palm Jumeira complex correspond to the relatively small part of the archipelago that has been developed. Isolated areas of blurred city lights are due to patchy clouds.

Astronaut photograph ISS030-E-99324 was acquired on February 22, 2012, with a Nikon D3S digital camera using a 400 mm lens, and is provided by the ISS Crew Earth Observations experiment and Image Science & Analysis Laboratory, Johnson Space Center. The image was taken by the Expedition 30 crew. The image has been cropped and enhanced to improve contrast, and lens artifacts have been removed. The International Space Station Program supports the laboratory as part of the ISS National Lab to help astronauts take pictures of Earth that will be of the greatest value to scientists and the public, and to make those images freely available on the Internet. Additional images taken by astronauts and cosmonauts can be viewed at the NASA/JSC Gateway to Astronaut Photography of Earth. Caption by William L. Stefanov, Jacobs/ESCG at NASA-JSC. 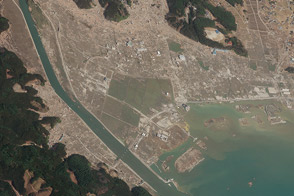