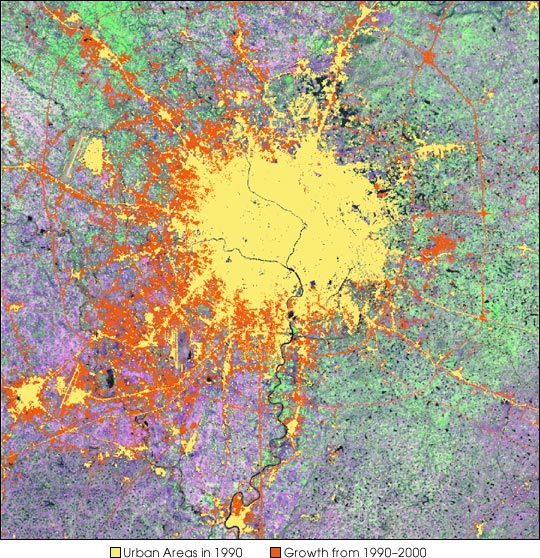 Backed up against the Qionglai Mountains in the Sichuan Province of central China, the 2,000+-year-old city of Chengdu, China, grew dramatically between July 1990 and July 2000. This Landsat image of Chengdu is part of a study that is using high- and moderate-resolution satellite data to monitor patterns of urbanization across the Earth. Urban landscapes are so different from natural ones that they have the potential to alter regional and global climate, changing everything from temperature, to rainfall patterns, to the chemistry of the atmosphere. The more humans urbanize the landscape, the greater the possible impacts on climate will be.

In the image above, yellow areas show the extent of the urban area in 1990, while orange areas show what was built up in the 10 years after that. In many cases, the urban build up has moved out of the core of the city along roadways, which radiate out from the city like spokes on a wheel. A new roadway makes an orange ring around the city and is connected to the core by many new “spokes.” Urban expansion has mostly been on the western side of the city, approaching the mountain foothills.

Scientists conducting the study are approaching their mapping task with several sources of data: high-resolution satellite data, like the Landsat data pictured here; night-time city light data; data from NASA’s Moderate Resolution Imaging Spectroradiometer (MODIS), which provides less detail but observes larger areas at one time; and population density data. This fusion of data sources maximizes the strengths and minimizes the limitations of each data type, and it allows a more complete picture of urban growth in cities across the world. To read more about the project and to see images from additional cities, read NASA satellites watch world’s cities grow.