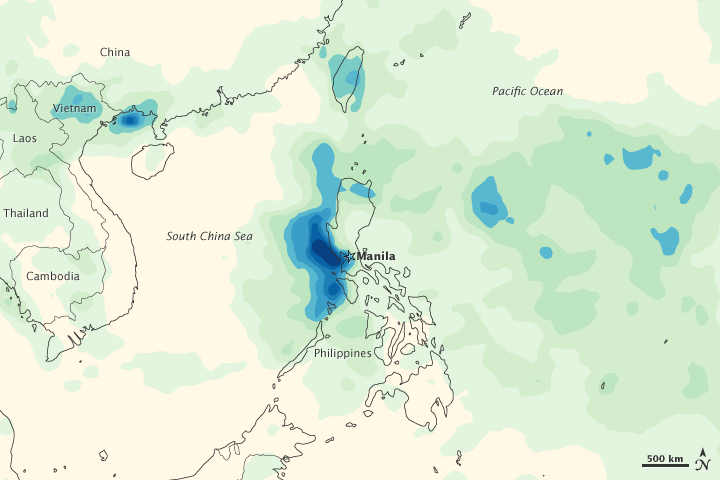 Torrential rains inundated the northern Philippines in early August 2012. The Philippine National Disaster Risk Reduction and Management Council stated that monsoon rains enhanced by Typhoon Haikui led to flooding. By August 7, flood waters were neck deep in parts of the capital city of Manila. By August 11, the death toll stood at 65, The Philippine Star reported. More than 600,000 residents had been displaced, and crops and fisheries had sustained severe losses.

This map shows rainfall totals in the Philippines and the surrounding region from July 25 to August 9, 2012. The heaviest rainfall—more than 900 millimeters (35 inches)—appears in dark blue. The lightest rainfall—less than 100 millimeters (4 inches)—appears in light green. Trace amounts of rain appear in yellow. The heaviest rainfall is concentrated immediately west of the northern Philippines, and some of the very heavy rain extends into Manila.

The monsoon floods struck shortly after Typhoon Saola claimed dozens of lives in the Philippines. On August 10, 2012, authorities reported that rescue operations for the latest round of flooding continued through the Manila metropolitan area. Meanwhile, forecasters warned that more rain could fall on the northern Philippines over the coming days.

This color-coded image shows rainfall amounts over the Philippines from January 12 to 18, 2011. The heaviest rainfall is concentrated over the eastern seaboard.