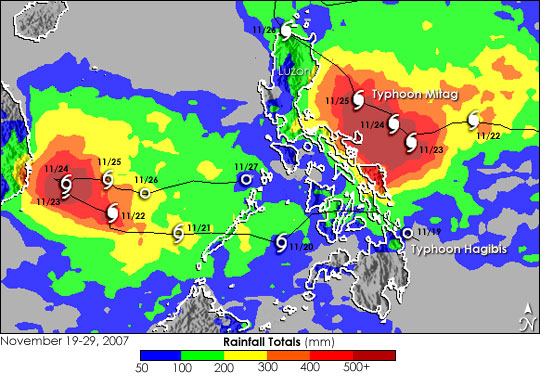 Two tropical cyclones, Hagibis and Mitag, dumped heavy rain on the Philippines between November 19 and November 29, 2007. Known in the Philippines as “Lando” and “Mina,” respectively, the two storms caused at least 29 deaths as a result of flooding and mudslides, reported the Agence France-Presse (AFP) news service on November 29. Hagibis struck the island nation first, passing through the central part of the islands on November 19. The storm then tracked west over the South China Sea towards Vietnam before making a dramatic “U-turn” back towards the Philippines. The second storm, Mitag, made landfall as a Category 1 storm on Luzon on November 25 and November 26 before turning out to sea.

This image shows the rainfall the two storms brought to the Philippines and the surrounding ocean between November 19 and November 29, 2007. The image was made from the near-real time, Multi-satellite Precipitation Analysis (MPA) at NASA Goddard Space Flight Center. Two separate areas of heavy rain, concentric circles of red and orange, lie off the coast of Vietnam over the South China Sea and along the eastern edge of the Philippines in the Philippine Sea. These two areas are associated with Hagibis and Mitag, respectively. The storm tracks are shown by the thin black lines with the positions recorded at 00:00 UTC each day marked with storm symbols.

The highest rainfall totals associated with Hagibis occurred over the South China Sea where the storm made its U-turn. The highest rainfall totals, shown in this image as dark red, exceed 500 millimeters (20 inches). The heaviest rain left by Typhoon Mitag occurs along either side of the storm’s path as it approached the Philippines. The image reveals that some of this heavy rain impacted the far eastern islands of the central Philippines. The northern island of Luzon, where Mitag made landfall, received on the order of 100 to 200 mm (4 to 8 inches) of rain (shown in green).

The image shows that the heaviest rain fell over the ocean, and this rain, along with high winds and waves, damaged or destroyed fishing vessels. As of November 29, 26 fishermen were still missing from a Filipino fishing vessel that capsized in the South China Sea as Hagibus passed overhead, reported the AFP. Two Chinese fishing vessels also sank in the area with 12 crew missing.

The Multi-satellite Precipitation Analysis is based in part on data collected by the Tropical Rainfall Measuring Mission (TRMM) satellite, which came into service in November 1997 with the primary mission of measuring rainfall in the tropics using a combination of passive microwave and active radar sensors. TRMM is a joint mission between NASA and the Japanese space agency, JAXA.

Typhoons Mitag and Hagibis flanked the Philippines, each striking different parts of the island nation within a week.