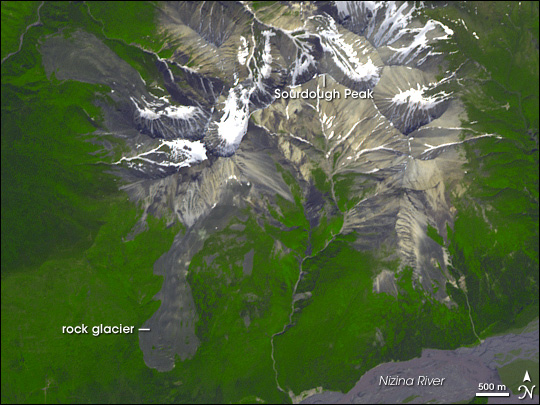 In Alaska’s Wrangell-St. Elias National Park, not far from a mountain named Sourdough Peak, a giant gray mass creeps down a slope, knocking over trees that lie in its path. Though it sounds like a work of science fiction, the gray mass is entirely natural. It is a rock glacier—a mass of rock and dirt held together by ice. Rock glaciers flow downslope very slowly compared to typical mountain glaciers. In some cases, the rock glaciers are stationary, and the gentler slopes of the glacier front (the downslope edge) have been colonized by lichen or other vegetation.

The Advanced Spaceborne Thermal Emission and Reflection Radiometer (ASTER) on NASA’s Terra satellite acquired this image on June 12, 2003. In this photo-like image, green indicates vegetation, white indicates snow cover, and light gray-brown indicates bare rock. The purple-gray color of the rock glacier is similar to the shallow, rock-filled bed of the Nizina River. The glacier flares out near its tongue, somewhat like a spoon. Just ahead of the glacier is thick forest, and forest persists along either side of the glacier where trees avoided obliteration. Patches of green on the rock glacier show that vegetation has colonized some of the downslope areas. In some ways, this makes the rock glacier more like above-ground permafrost than a typical mountain glacier.

Scientists have proposed different hypotheses about rock glacier formation, debating whether they are simply the end-stage of a disappearing mountain glacier, or whether they form from unique glacial and geologic processes. But all the hypotheses agree that a necessary ingredient is prolonged cold conditions, the same cold conditions that create permafrost. If a glacier is big enough, it can sustain its own internal microclimate, remaining cool even when the surroundings are relatively warm. In this image, for instance, even though most of the snow has melted from the nearby mountain peaks and tree-covered slopes, the rock glacier persists.

You can download a 15-meter-resolution KMZ file of the rock glacier suitable for use with Google Earth.