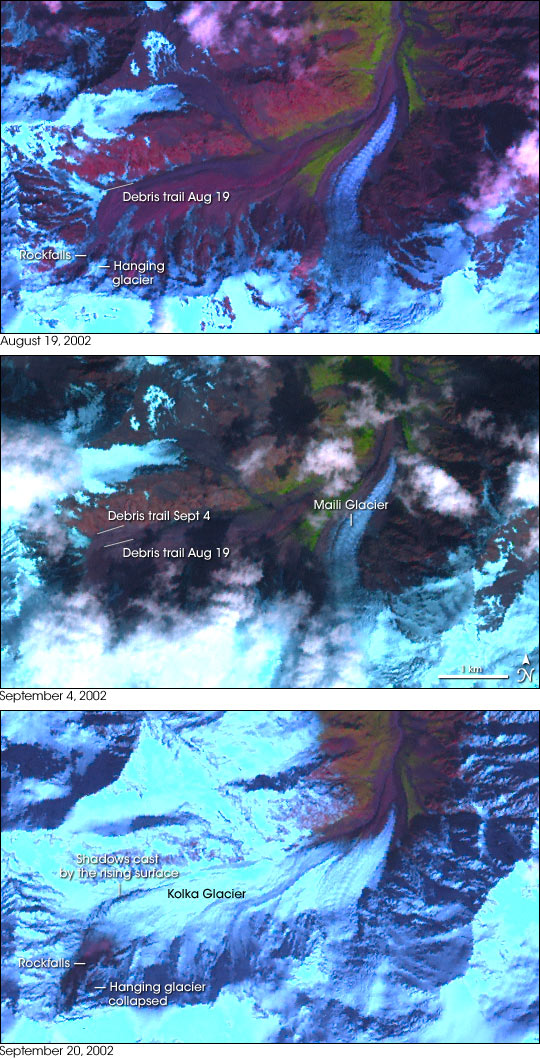 On September 20, 2002, the Kolka Glacier in the Caucasus Mountains collapsed under the slopes of Mt. Dzhimarai-khokh. By volume of transported ice, mud, and debris (up to 140 million cubic meters in total) this is the largest known disaster involving glaciers. After the event, scientists made field trips to the area and analyzed many satellite images to determine the depth, area, and speed of the debris flow. (See The Collapse of the Kolka Glacier.) But the exact cause of the disaster remained a mystery.

The Enhanced Thematic Mapper Plus (ETM+) instrument onboard NASA's Landsat 7 satellite provided images of the Kolka collapse site on August 19, September 4, and September 20, 2002, which were not used during the initial disaster analysis. The September 20 image was taken about 11:31 a.m. local time—eight and a half hours before the glacier disintegrated and raced down the valley, killing 125 people. In these images, snow and ice are bright blue, clouds are white, bare or sparsely vegetated ground is pink, and vegetation is bright green. In the two earlier images, the Kolka itself doesn't appear blue because the surface of the glacier is dirty. By September 20, fresh snow had fallen.

Photographs and field observations both before and after the event documented rock and ice falls off the wall of Mt. Dzhimarai-khokh onto Kolka Glacier, but how much had fallen in the months and years before the disaster and how much just hours before was unknown. The ETM+ data allowed Russian scientists Olga Tutubalina, Sergey Chernomorets and Dmitry Petrakov from the Moscow State University and the University Centre for Engineering Geodynamics and Monitoring to make the first estimates of the area of rock falls and hanging glaciers that fell onto Kolka shortly before the disaster.

The image from August 19 shows two types of debris covering the southwestern end of Kolka: rock falls and a large ice fall from a hanging glacier on the slopes above Kolka. The total area of the collapsed rock and ice on August 19 amounted to about 0.55 square kilometers (135 acres). On September 4, increasing trains of debris had progressed across the glacier, covering most of its rear part. The September 20 image reveals that a huge rock fall slid off the wall of Mt. Dzhimarai-khokh and covered about 0.17 square kilometers (42 acres) of the Kolka Glacier surface. The glacier and adjacent slopes are blanketed with new snow, but the snow is covered by the fresh rock fall. By the morning of September 20, the hanging glacier above the Kolka had entirely collapsed, bringing the amount of ice falls on Kolka Glacier in the month before the collapse to 0.34 square kilometers (84 acres).

The September 20 image shows one more important detail: a surface rise, abruptly ending to the north. The height of this rise, which the scientists calculated from the shadows it casts, ranges from 40 to 70 meters (131-230 feet). This rise may be an accumulation of rock and ice fall deposits, covered by new snow, or it may be caused by a deformation of the glacier from the repeated impact of falling ice and rock. The rock and ice falls were hitting the south-west corner of the glacier like a billiard-cue striking a ball, and the weight of fallen rock and ice was probably pressing the glacier out to the north.

Although rock and ice falls are the usual feed mechanisms for Kolka Glacier, in 2002 they reached an extremely high volume, overloaded the glacier, and forced it to plunge out of its bed in the evening of September 20. Falls continued after the disaster. In the summer of 2003, Chernomorets, Tutubalina and Petrakov observed rock debris continuously falling off the wall of Mt. Dzhimarai-khokh, and occasional falls of ice blocks. In the summer of 2004, the falls still continued, though less frequently.

In winter and spring, avalanches bring abundant snow into the Kolka Glacier cirque. The snow alternates with layers of falling debris and gradually turns into ice. The glacier is reborn and slowly gathers strength for a new jump forward.

The images use infrared, near infrared, and green wavelengths (ETM+ bands 5, 4, and 2 respectively). The image has also been sharpened with the high-resolution panchromatic band.

NASA Earth Observatory images Jesse Allen, using data provided courtesy of the Landsat Project Science Office and the USGS Earth Resources Data Center. Image analysis and story provided by Olga Tutubalina, Sergey Chernomorets and Dmitry Petrakov from the Moscow State University and the University Centre for Engineering Geodynamics and Monitoring. The scientists examined the new data along with a large archive of ground, and aerial imagery, as well as with their experience of ten field trips to the area both before and after the collapse.