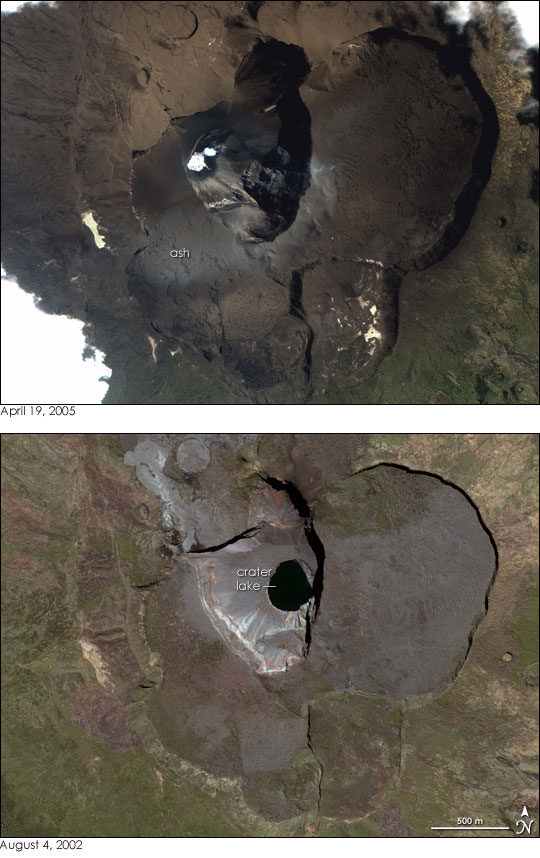 Villagers on the island of Grand Comore are returning home to ash-tainted water after the Karthala Volcano stopped erupting on April 19, 2005. The volcano began spewing ash and gas on April 17, forcing as many as 10,000 people to flee.

The Karthala Volcano is notoriously active, having erupted more than 20 times since the 19th century. The volcano rises to a height of 2,361 meters on the southern end of Grand Comore, the largest island in the nation of Comoros. Frequent eruptions have shaped the volcano's 3 by 4 kilometer summit caldera, which is shown in these Ikonos images.

The top image shows the summit caldera on April 19, 2005, just as the eruption was ending. The bright white cloud on left of center, near the edge of the caldera may be steam from the eruption. The lower image shows the summit caldera on August 4, 2002. Some of the differences between the two images are caused by differences in season and time of day. The top image was taken early in the morning when the eastern sun cast long shadows over the eastern side of the crater. The sun was more directly overhead in the lower image.

Beyond differences in lighting, the crater has clearly been changed by the recent eruption. A grey field of ash surrounds the crater and the caldera itself seems larger and deeper. The crater lake that dominates the caldera in the 2002 image is gone entirely. The lake formed after Karthala's last eruption in 1991. In its place are rough, dark grey rocks, possibly cooling lava or rubble from the collapsed crater.

On April 17, the Karthala volcano in the island nation of Comoros began to erupt, forcing as many as 10,000 people from their homes. It erupted again in November 2005, fouling water supplies.