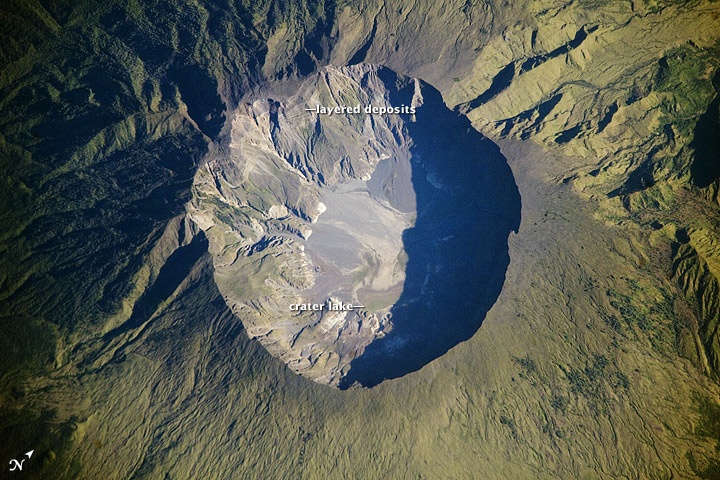 On April 10, 1815, the Tambora Volcano produced the largest eruption in recorded history. An estimated 150 cubic kilometers (36 cubic miles) of tephra—exploded rock and ash—resulted, with ash from the eruption recognized at least 1,300 kilometers (808 miles) away to the northwest. While the April 10 eruption was catastrophic, historical records and geological analysis of eruption deposits indicate that the volcano had been active between 1812 and 1815. Enough ash was put into the atmosphere from the April 10 eruption to reduce incident sunlight on the Earth’s surface, causing global cooling, which resulted in the 1816 “year without a summer.”

This detailed astronaut photograph depicts the summit caldera of the volcano. The huge caldera—6 kilometers (3.7 miles) in diameter and 1,100 meters (3,609 feet) deep—formed when Tambora’s estimated 4,000-meter- (13,123-foot) high peak was removed, and the magma chamber below emptied during the April 10 eruption. Today the crater floor is occupied by an ephemeral freshwater lake, recent sedimentary deposits, and minor lava flows and domes from the nineteenth and twentieth centuries. Layered tephra deposits are visible along the northwestern crater rim. Active fumaroles, or steam vents, still exist in the caldera.

In 2004, scientists discovered the remains of a village, and two adults buried under approximately 3 meters (nearly 10 feet) of ash in a gully on Tambora’s flank—remnants of the former Kingdom of Tambora preserved by the 1815 eruption that destroyed it. The similarity of the Tambora remains to those associated with the AD 79 eruption of Mount Vesuvius has led to the Tambora site’s description as “the Pompeii of the East.”

Astronaut photograph ISS020-E-6563 was acquired on June 3, 2009, with a Nikon D3 digital camera fitted with an 800 mm lens, and is provided by the ISS Crew Earth Observations experiment and Image Science & Analysis Laboratory, Johnson Space Center. The image was taken by the Expedition 20 crew. The image in this article has been cropped and enhanced to improve contrast. Lens artifacts have been removed. The International Space Station Program supports the laboratory to help astronauts take pictures of Earth that will be of the greatest value to scientists and the public, and to make those images freely available on the Internet. Additional images taken by astronauts and cosmonauts can be viewed at the NASA/JSC Gateway to Astronaut Photography of Earth. Caption by William L. Stefanov, NASA-JSC.