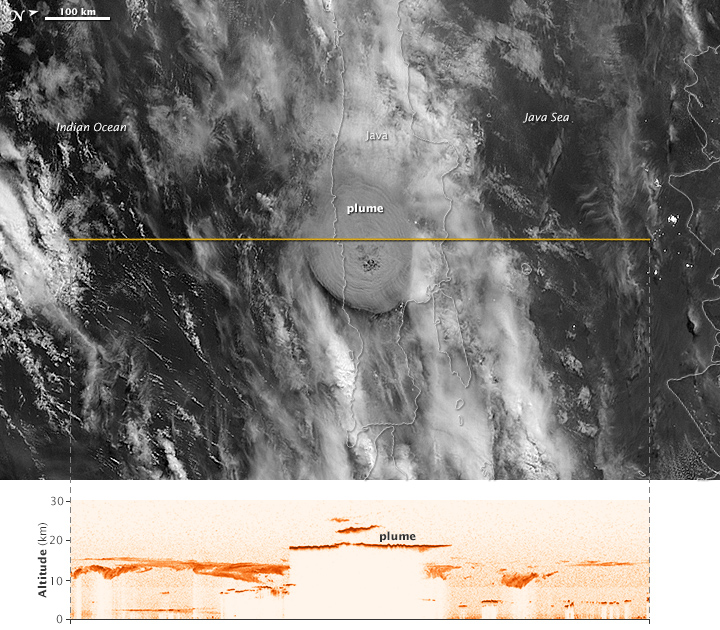 Forty minutes later, at 1:10 a.m. (18:10 UTC), the Cloud-Aerosol Lidar and Infrared Pathfinder Satellite Observation (CALIPSO) satellite flew over the plume with CALIOP, its lidar instrument. Acting like a laser range finder, CALIOP uses a laser to create a profile of clouds and particles in the atmosphere. The instrument recorded the ash cloud at nearly 20 kilometers (12 miles) altitude, with sections of the plume reaching to nearly 30 kilometers (19 miles).

Ash at this height poses a significant problem for airplanes becuase it can clog and stall jet engines. The eruptions forced seven airports in Central and East Java to close, eliminating all air travel in the region. More significant is the human impact: 200,000 people were evacuated from the 10-kilometer (6-mile) area around the volcano, and three people were reported dead.

Historically, Kelut has produced some of Indonesia’s most deadly eruptions, which typically include pyroclastic flows and lahars from a crater lake at the summit. After a 1919 eruption that left 5,000 dead, an engineering project attempted to drain the lake to minimize the threat during future eruptions. The biggest threat in the current eruption seems to be the ash, which is falling in a wide area around the volcano. 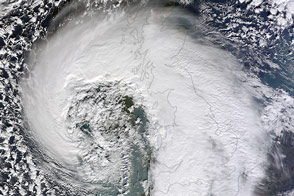