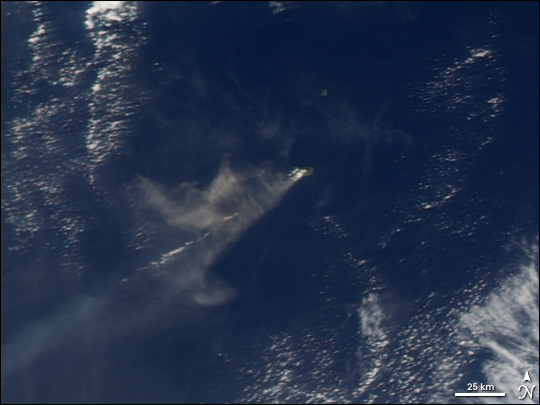 The Anatahan Volcano rumbled back to life on January 6, 2005, and when the Moderate Resolution Imaging Spectroradiometer (MODIS) passed over on NASA’s Aqua satellite the next day, a thin plume of ash still rose from the volcano. The volcano is located on a 9-kilometer-wide island in the Northern Mariana Islands of the North Pacific. Though the youngest flows on the volcano were no more than a few hundred years old, no eruption had been recorded at the volcano until May 10, 2003. MODIS captured the volcano’s first recorded eruption, which sent large clouds of ash over the Pacific. After its initial eruption, the volcano emitted plumes of ash and steam throughout May 2003 before quieting for a year. In May 2004, earthquakes and ash emissions began again and continued intermittently through August 2004. Now the volcano is beginning to erupt again. Air traffic has been diverted around the most recent eruption. Volcanic ash can clog jet engines, causing engine failure within minutes.