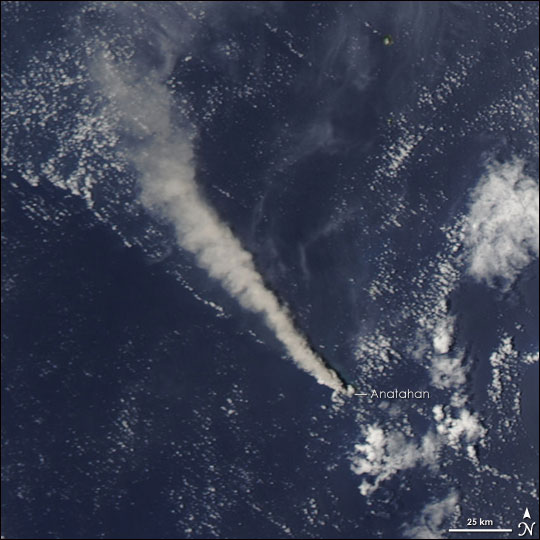 Though seismic equipment set up to monitor the Earth’s tremors on Anatahan Island stopped working consistently during the volcano’s explosive eruption on April 6, 2005, the machines are still sending some information to scientists monitoring the volcano. The story they tell is of a restless volcano that has become more restless since April 24. Earthquake activity has been increasing, and as this Moderate Resolution Imaging Spectroradiometer (MODIS) image shows, the plume of ash and steam that rises from the volcano has thickened. The type of earthquakes observed at Anatahan—harmonic tremors—occur when magma moves underground and are usually associated with active volcanoes. An increase in activity may be a signal that the volcano is preparing for another eruption.

Anatahan’s largest recorded eruption occurred on April 6, 2005, when it blasted about 50 million cubic meters of ash up to 50,000 feet (15 kilometers) into the atmosphere. Twenty days later, on April 26, the volcano was still sending ash and steam into the air. The April 6 eruption was preceded by three months of ash and steam plumes similar to the one seen here. Though the volcano is not currently dangerous, Emergency Management Office of the Northern Mariana Islands has declared the tiny island of Anatahan off-limits and warns aircraft to avoid the area within 10 nautical miles (about 19 kilometers) around the volcano because conditions could change rapidly. For more information about the current conditions on Anatahan, see Current Update of Anatahan Volcano, provided by the Emergency Management Office of the Northern Mariana Islands and the United States Geological Survey.

The above MODIS image was acquired on April 26, 2005. The large image is at MODIS maximum resolution of 250 meters per pixel. The MODIS Rapid Response Team provides daily images of the volcano as well as additional resolutions of the above image.