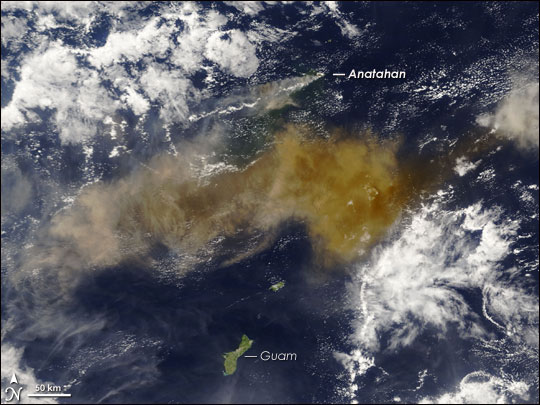 A major eruption blasted from Anatahan volcano on April 6, 2005, sending a plume of ash up to 15,200 meters (50,000 feet) into the air. This is the largest eruption at the volcano since its first recorded eruption on May 10, 2003. This Moderate Resolution Imaging Spectroradiometer (MODIS) was acquired by NASA’s Terra satellite at 00:35 UTC, about eight hours after the eruption began. By this time, the ash plume had spread south to entirely cover Saipan and Tinian, the islands immediately south of the volcano. Anatahan is an uninhabited island, and there have been no injuries reported from either Saipan or Tinian, the inhabited islands that have been affected. Aircraft have been warned to avoid the area because volcanic ash can destroy jet engines.