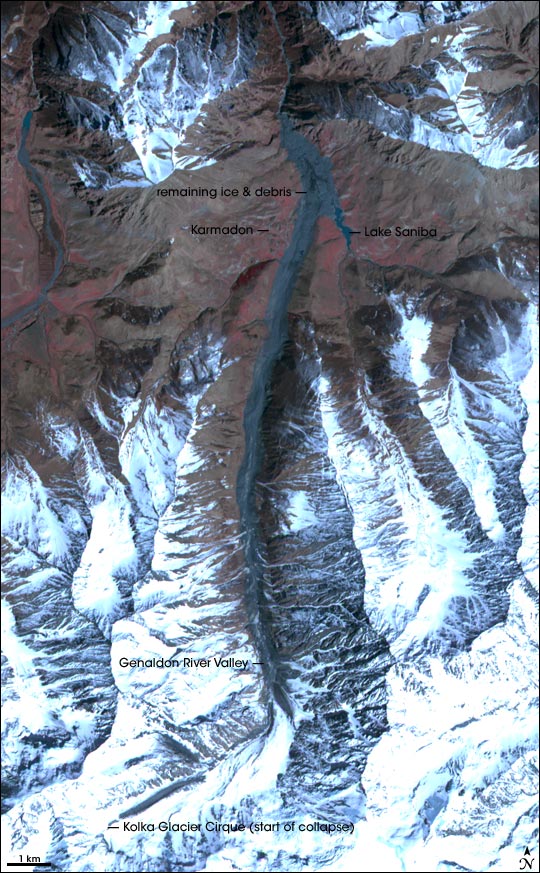 On the evening of September 20, 2002, in a steep-walled basin high in the Caucasus Mountains of southern Russia, chunks of rocks and hanging glacier came “unglued” from the slopes of the north face of Mt. Dzhimarai-Khokh and crashed down onto the Kolka Glacier. Kolka shattered under the impact, and out of the cirque (the basin) exploded a massive avalanche of ice, rock, water, and other debris, which plowed down the Genaldon River Valley at speeds of at least 180 kilometer per hour.

The evidence of this devastating event was still visible from satellite a year and a half later. This image was captured by the Advanced Spaceborne Thermal Emission and Reflection Radiometer (ASTER) on NASA’s Terra satellite on April 9, 2004. The Genaldon River Valley (center) appears to have been lined in slate where the avalanche left an 18-kilometer (11-mile) trail of ice, rock, and pulverized stone along the slopes.

The valley widens into the Karmadon Depression, and then funnels into a narrow gorge called the Gates of Karmadon. At the Gates, the debris backed up into the depression and buried parts of the village with a layer of ice and rock 130 meters thick. Many people were killed in the disaster. Rivers that previously flowed into the Genaldon backed up behind and along the margins of the ice dam, forming new lakes. Though many drained gradually through crevasses in the ice, some villages in adjacent valleys were flooded in the days immediately following the event. The largest of the lakes, Lake Saniba, is still visible to the east of Karmadon.

Image by Robert Simmon, based on ASTER data