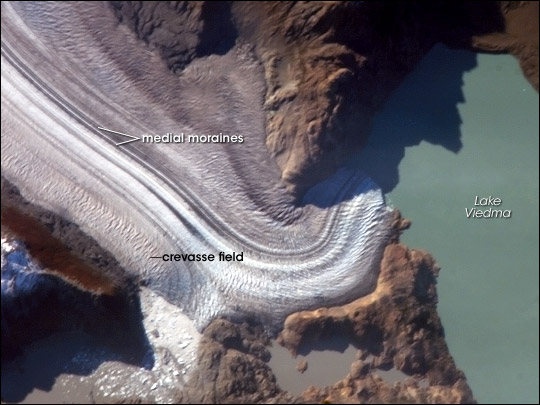 The icefields of Patagonia, located at the southern end of South America, are the largest masses of ice in the temperate Southern Hemisphere (approximately 55,000 square kilometers). The icefields contain numerous valley glaciers that terminate in meltwater-fed lakes. These are known as “calving” glaciers, as they lose mass when large ice chunks collapse from the terminus—or end—of the glacier. These newly separated chunks of ice are then free to float away, much like ice cubes in a punch bowl.

The terminus of the Viedma Glacier, approximately 2 kilometers across where it enters Lake Viedma, is shown in this astronaut photograph. Moraines are accumulations of soil and rock debris that form along the sides and front of a glacier as it flows across the landscape (much like a bulldozer). Independent valley glaciers can merge together as they flow down slope, and the moraines become entrained in the center of the new ice mass. These medial moraines are visible as dark parallel lines within the white central mass of the glacier (image center and left). Crevasses—oriented at right angles to the medial moraines—are also visible in the grey-brown ice along the sides of the glacier. The canyon-like crevasses form as a result of stress between the slower moving ice along the valley sides (where there is greater friction) and the more rapidly moving ice in the center of the glacier. Calving of ice from the southwestern fork of the glacier terminus is visible at image lower left.

Astronaut photograph ISS013-E-6947 was acquired April 12, 2006, with a Kodak 760C digital camera using an 800 mm lens, and is provided by the ISS Crew Earth Observations experiment and the Image Science & Analysis Group, Johnson Space Center. The image in this article has been cropped and enhanced to improve contrast. Lens artifacts have been removed. The International Space Station Program supports the laboratory to help astronauts take pictures of Earth that will be of the greatest value to scientists and the public, and to make those images freely available on the Internet. Additional images taken by astronauts and cosmonauts can be viewed at the NASA/JSC Gateway to Astronaut Photography of Earth.