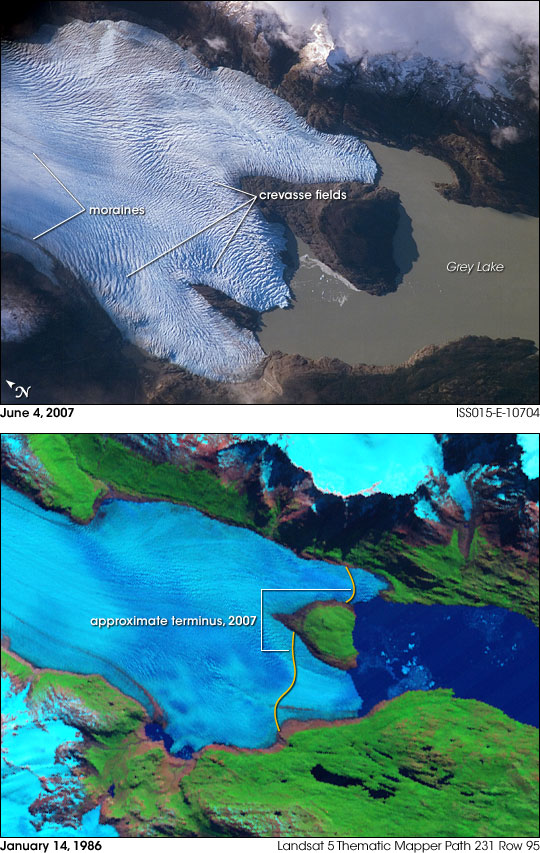 The Southern Patagonian Icefield of Chile and Argentina hosts several spectacular glaciers—including Grey Glacier located in the Torres del Paine National Park in Chile. This glacier, which in 1996 had a measured total area of 270 square kilometers and a length of 28 kilometers (104 square miles in area, 17 miles long), begins in the Patagonian Andes Mountains to the west and terminates in three distinct lobes into Grey Lake (upper image). The upper image is a photograph taken by an astronaut aboard the International Space Station, and it captures a striking blue coloration of the glacier. The coloring is due to the ice’s absorption of red wavelengths of light and scattering of blue wavelengths of light as it is transmitted through the ice.

Certain portions of the glacier visible in the image are indeed gray. Linear gray-brown moraines are accumulations of soil and rock debris that form along the edges of a glacier as it flows downhill across the landscape (much like a bulldozer blade). Glaciers flowing downslope through adjacent feeder valleys ultimately meet, and debris entrained along their sides becomes concentrated in the central portion of the resulting single, large glacier—much as smaller streams of water join to form a single large river. Three of these medial moraines are visible in the ice mass at image center left.

Gray-brown patches of debris from adjacent mountainsides color the surface of the easternmost lobe of the glacier (image top). Several crevasse fields are visible in the image. The crevasses, each a small canyon in the ice, form as a result of stress between slower- and faster-moving ice within the glacier. The crevasse patterns of Grey Glacier are complex, perhaps due to the three-lobed nature of its terminus, or end, into Grey Lake. The rugged surface of the glacier is also demonstrated by the jagged shadows it casts onto the surface of the lake.

The astronaut photograph, acquired in 2007, is compared with a false-color image from the Landsat 5 satellite captured in 1986. The false-color image highlights glacier ice in bright blue (lower image). Vegetation is bright green, and bare ground is pink. The general position of the glacier’s terminus in 2007 is marked with yellow lines on the 1986 image. All three lobes have retreated over the 22-year period, with the greatest loss of ice occurring along the westernmost lobe terminus. Grey Glacier, like others in southern Patagonia, loses ice from its terminus as it enters the water, a process known as calving. Calving produces large free-floating chunks of ice; some floating ice is visible near the central glacier lobe in the upper image. The observed retreat means that ice loss has been greater than ice replenishment. It is most likely due to a combination of increased regional temperatures and changes in precipitation amounts.

The featured astronaut photograph, ISS015-E-10704, was acquired June 4, 2007, with a Kodak 760C digital camera using an 800 mm lens, and is provided by the ISS Crew Earth Observations experiment and the Image Science & Analysis Laboratory, Johnson Space Center. The image in this article has been cropped and enhanced to improve contrast. The International Space Station Program supports the laboratory to help astronauts take pictures of Earth that will be of the greatest value to scientists and the public, and to make those images freely available on the Internet. Additional images taken by astronauts and cosmonauts can be viewed at the NASA/JSC Gateway to Astronaut Photography of Earth. Landsat Thematic Mapper image by Robert Simmon, based on data archived by the Global Land Cover Facility.