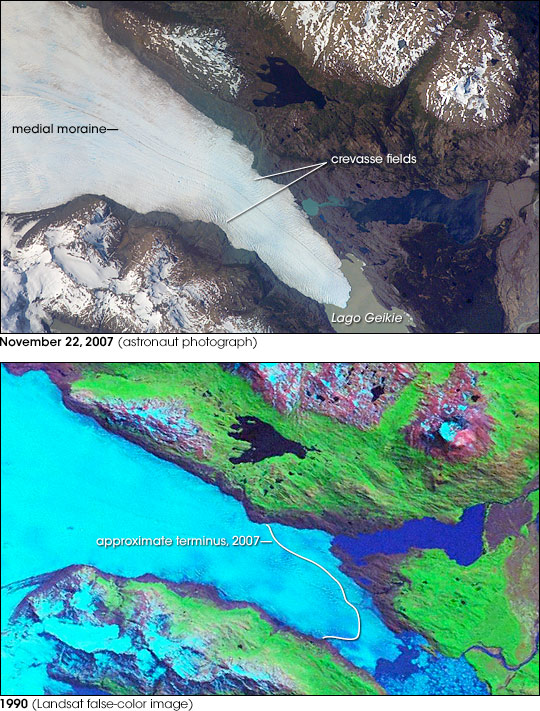 Tyndall Glacier is located in the Torres del Paine National Park in Chile. This glacier, which has a total area of 331 square kilometers and a length of 32 kilometers (based on 1996 measurements), begins in the Patagonian Andes Mountains to the west and terminates in Lago Geikie. These images compare the extent of the glacier in 2007 (astronaut photo, top) and 1990 (Landsat satellite image, bottom).

The digital astronaut photograph records visible light in red, green, and blue wavelengths (true color), whereas Landsat detects visible, near-infrared, and shortwave-infrared wavelengths of light, which are then displayed as red, green, and blue on screen (false color). This is why the coloration of the images is so strikingly different for the same material; ice, for example, is white to light blue in the astronaut photograph, but bright blue in the Landsat image.

Comparison of the two images indicates that the Tyndall Glacier terminus (indicated by the white line on the lower image) has retreated significantly during the past 17 years. Significant ice loss was also observed earlier this year at Grey Glacier, about 30 kilometers to the north-northeast, suggesting both glaciers are responding similarly to regional changes in temperature and precipitation.

A medial moraine is visible in the center of the glacier, extending along its length (top image, center left). Moraines—accumulations of soil and rock debris—form along the edges of a glacier as it flows downhill across the landscape (much like a snowplow builds ridges of snow along the roadside). Glaciers flowing downslope through adjacent valleys merge when they encounter each other, and debris entrained along their sides becomes concentrated in the central portion of the new combined ice mass, much as small streams join to form a river.

Crevasse fields are also visible in the image. The crevasses—small, but potentially quite deep fissures—form as a result of stress between slower- and faster-moving ice within the glacier. Crevasse fields on Tyndall Glacier are most evident near rock promontories extending into the glacier; these rock outcrops cause the ice to slow as it flows around the obstruction.

The featured astronaut photograph, ISS016-E-12047, was acquired November 22, 2007, with a Kodak 760C digital camera using a 400 mm lens, and is provided by the ISS Crew Earth Observations experiment and the Image Science & Analysis Laboratory, Johnson Space Center. The images in this article have been cropped and enhanced to improve contrast. The Landsat Thematic Mapper image was obtained using NASA World Wind software. The International Space Station Program supports the laboratory to help astronauts take pictures of Earth that will be of the greatest value to scientists and the public, and to make those images freely available on the Internet. Additional images taken by astronauts and cosmonauts can be viewed at the NASA/JSC Gateway to Astronaut Photography of Earth.

Icefall on the Lambert Glacier