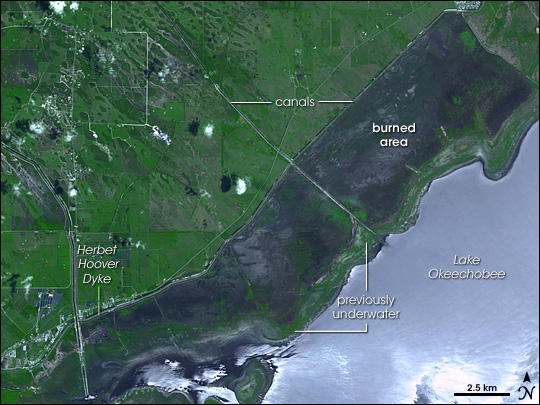 Florida’s multi-year drought reached extreme levels in late spring 2007, and the impacts ranged from water restrictions to dangerous wildfires. The water levels in Lake Okeechobee hit record low levels in May and June, and swampy vegetation around the retreating shoreline began to dry out. At the end of May, more than 10,000 acres of desiccated vegetation in Buckhead Marsh burned in a fast-moving, wind-driven wildfire.

This image shows the burn scar left on the landscape by the fire. Captured on June 23, 2007, by the Advanced Spaceborne Thermal Emission and Reflection Radiometer (ASTER) on NASA’s Terra satellite, the image reveals that a huge swath of the marsh between the lake and the surrounding Herbert Hoover Dyke was scorched. The burned area appears charcoal, while vegetation appears green. A few isolated clouds cast black shadows to their west. Roadways and cement-lined canals appear as white lines. Small developed areas appear grayish-white. Lake Okeechobee appears silvery blue because of bright sunlight reflecting off the surface.

Between mid-May and mid-June 2007, drought intensity across southern Florida, including the area around Lake Okeechobee, has teetered back and forth between Category D3 (extreme drought) and D2 (severe drought) on the U.S. Drought Monitor’s scale. According to U.S. Army Corps of Engineers report from June 24, 2007, Lake Okeechobee water levels were nearly 4.5 feet below their long-term average (1965-2006) for this time of year. Much of the area between the burn scar and the lake itself was previously underwater; it has been exposed as the water level has fallen.

As drought shrinks water levels in Lake Okeechobee, marshy areas along the shore are drying out and becoming flammable.

In late April 2007, the company in charge of the lakes and reservoirs that make up the Snowy Mountains Hydroelectric Scheme in southern New South Wales reported that lake levels were at 10 percent of capacity, the lowest they had been since the system was built about 50 years ago.