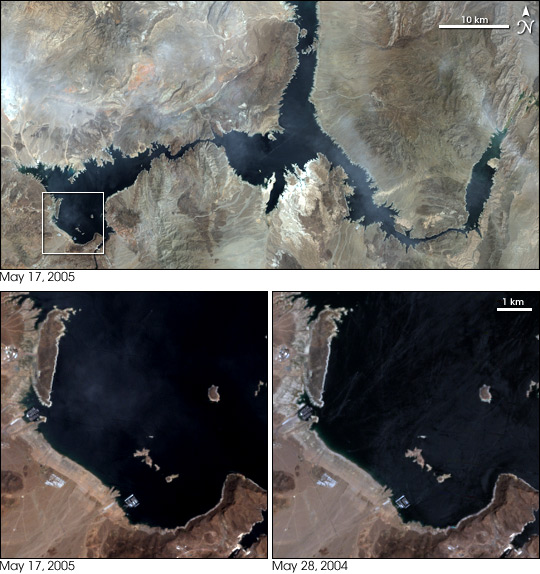 In the western United States, water is the most critical natural resource. In addition to drinking supplies, water sustains agriculture, provides hydroelectric power, and nourishes ecosystems. The artificial Lake Powell and Lake Mead reservoirs on the Colorado River are the most important water caches in the West. Over the past several years, sustained drought has brought these reservoirs to unusually low levels, though not down to the record lows of the 1950s. (See Drought Lowers Lake Mead.)

A wetter-than-average 2004-05 winter with slightly above-average snowfall in the upper reaches of the Colorado basin have eased the drought slightly. Meanwhile, heavy rain in California has also reduced that state’s water demands from Lake Mead. This image shows almost the entire lake in 2005 (top) and a comparison of the southwestern corner in 2005 (bottom left) and 2004 (bottom right). The Landsat 7 satellite captured most of the scene on May 17, 2005. Images taken on May 1 and April 15 were used to fill gaps in the May 17 data.

Between 2004 and 2005, some subtle signs of recovery were apparent along the shoreline of Lake Mead to the northwest of Hoover Dam, which straddles the Colorado River as it passes out of the southwestern corner of the lake. Careful inspection of the curving shoreline reveals that the blue-white rectangle of a marina appears slightly farther from shore in 2005 than it was in 2004. Near the top left corner, a former island has reconnected with the mainland during the past few years of drought, but in 2005, the lake has cut the island off from the mainland just a little farther than it did in 2004.

As of June 2, 2005, the U.S. Drought Monitor had placed the Southwest in the “abnormally dry to moderate drought” condition, a substantial improvement from the conditions of the past several years. Snowmelt for this summer is predicted to be around 106 percent of average. If this prediction runs true, and water-releases follow current plans, Lake Mead should be at 57.5 percent of capacity in late September, a slight improvement over last year, though still low, and at a similar level in September 2006 if the 2005-06 winter is average as expected. The slightly better-than-average 2005 water year has helped ease drought concerns, but not alleviated them completely.

This recent drought is not the most severe the southwest has ever endured. A five-year drought in the 1950s left many regions in the southwest so devastated that they were declared federal drought disaster areas. The current drought, which began in 1999, had been softened by a few wet years such as the 2004-05 winter, though there has not been enough water to end the drought. Long-term climate records taken from tree rings reveal that cycles of drought are common in the southwestern United States. In the 16th century, a decades-long drought plagued the region. Other droughts, though none as severe, have occurred regularly over the past three centuries.