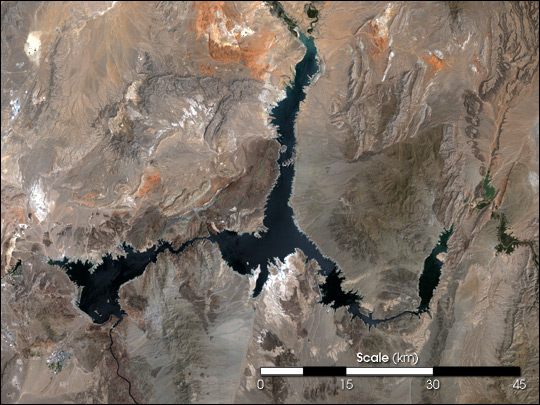 Water is the lifeblood of the western United States. Not only does it sustain municipal drinking supplies and agriculture, it is also one of the primary sources of electricity. Dams along the Colorado and other rivers provide the steady water supply needed for large populations and agriculture as well as the electricity needed for industry. Perhaps the greatest symbol of water use in the west is the Hoover Dam and the massive reservoir it creates, Lake Mead. Shown in this Landsat composite image, Lake Mead is one of the largest reservoirs in the world and one of the most important water sources in the western United States. Over the past few years, however, rain and snow have been scarce, and water levels in the reservoir are steadily dropping. As of June 8, 2004, the U.S. Drought Monitor had placed the southwest in extreme hydrological drought, one designation above the worst in their drought intensity scale.

The impact of the drought is apparent in the dwindling size of Lake Mead. (See Drought Lowers Lake Mead.) That the vast lake has shrunk visibly in satellite imagery indicates that the drought is severe. The Colorado River enters the lake from the east, image right, and exits to the south, image bottom left. The Hoover Dam can be seen as a faint white line across the Colorado River just below the point where the river flows out of the lake. The top arm of the lake is formed by the Muddy and Virgin Rivers. The image is a natural color image made using red, green, and blue wavelengths. The Landsat 7 satellite captured the primary image on May 30, 2004. Images taken on April 28 and May 14 were used to fill in gaps in the data.

This is not the most severe drought the southwest has ever endured. A five-year drought in the 1950s left many regions in the southwest so devastated that they were declared federal drought disaster areas. The current drought, which began in 1999, had been softened by a few wet years, though there has not been enough water to end the drought. Long-term climate records taken from tree rings reveal that patterns of drought are common in the southwestern United States. In the 16th century, a decades-long drought plagued the region. Other droughts, though none as severe, have occurred regularly over the past three centuries.